All Voices Need to Be Present: How the Media Can Create Feminist Stories

This past week I got the honor to attend Generation Ratify’s third Rethinking Sisterhood webinar, “Dissecting Propaganda and Other Media Abuse.” Rethinking Sisterhood: The Role of Media in Affirming the ERA is a five-part webinar series with sessions every Thursday from 5:00-6:00pm, and let me tell you, the hour flies by. Every minute was filled with lively and compelling discussion about the importance of representation in the media, how politics and the media need to be involved in one another, the many hurdles that block equality in media, and the importance of wholeness of representation (as opposed to, for example, asking women of color to fragment their intersectional identities). Before I knew it, moderator Gabbie Gonzales was wrapping up the talk.

The Rethinking Sisterhood webinar series is a collaborative effort between agnès films, Directed by Women, Equal Means Equal, Generation Ratify, Media Equity, and Women Occupy Hollywood. This series focuses on speakers discussing the importance of modern day media providing coverage of  the current strive to make the Equal Rights Amendment (ERA) the Constitution’s 28th amendment. “Dissecting Propaganda and Other Media Abuse” required a solid finger stretch after all of the typing I did taking notes, but I just couldn’t get enough of what Maria Giese, Shireen Mitchell, and DeeDee Halleck were saying. 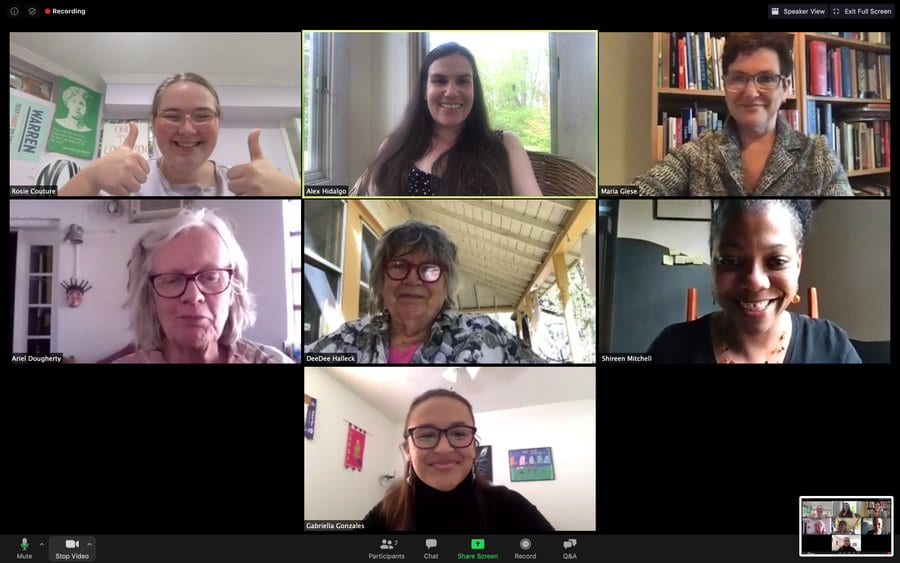 A “group photo” of the panelists and organizers before the webinar began.

All three speakers are legends. Maria Giese is one of six leaders who started the investigation to prove Hollywood’s industry-wide violation of Title VII. Her action instigated the groundbreaking industry-wide ACLU and federal investigations for women directors in Hollywood. I’ll pause so you can applaud! Shireen Mitchell is a digital data analyst/disinformation fighter in diversity, tech, media and politics. As a coder since age 10 (wow!), she uses her knowledge to teach fellow black girls how to code. She is the founder of Digital Sisters/Sistas and Stop Online Violence Against Women, a project to address online threats against women. She explained that her company tracks the harassment experienced by women of color (both by attackers and the lack of action taken by companies in response to reported attacks). She gathers and analyzes data that shows racism and sexism, and is still fighting to show that data, experiencing discrimination during the process of exposing what she is currently experiencing. I couldn’t believe the obstructions she still faces in spite of everything she has accomplished. I am still heated about it. DeeDee Halleck is a media activist and the founder of Paper Tiger Television and co-founder of the Deep Dish Satellite Network, and Professor Emerita in the Department of Communications at the University of California San Diego. She spoke with such insightful wisdom, telling the audience how she never intended to venture into Hollywood and instead wanted to explore the aesthetic possibilities of film; she felt film had potential for education and expression, and went in that direction. Spoken like a true artist.

The ERA is extremely close to becoming a constitutional amendment, with the battle eventually coming to a head in the Supreme Court, necessitating significant public support when it does get there. The ERA may not be the “silver bullet” many wish it were because “the key part is understanding the aspects of the work we still have to do,” as Mitchell said of the impact the ERA will make in the tech world and other industries. “It’s about enforcement,” continued Maria Giese, who also stated that the most important thing when it comes to working towards the ratification and legislative work is “to make sure we are equally participating in [the] economic and storytelling world[s].” Inequality is still very much alive and though an amendment won’t change this social narrative right away, it will help both in the courtroom and in each of our mindsets. That’s why discussions such as these webinars are so essential: opening up the platform to women who are actively fighting the racism and sexism in the media industry will enlighten all of us to both the reality that was and is, and provide hope for the empowerment that this fight is for. In fact, agnès films published a call to action letter directed towards media outlets with resounding support. 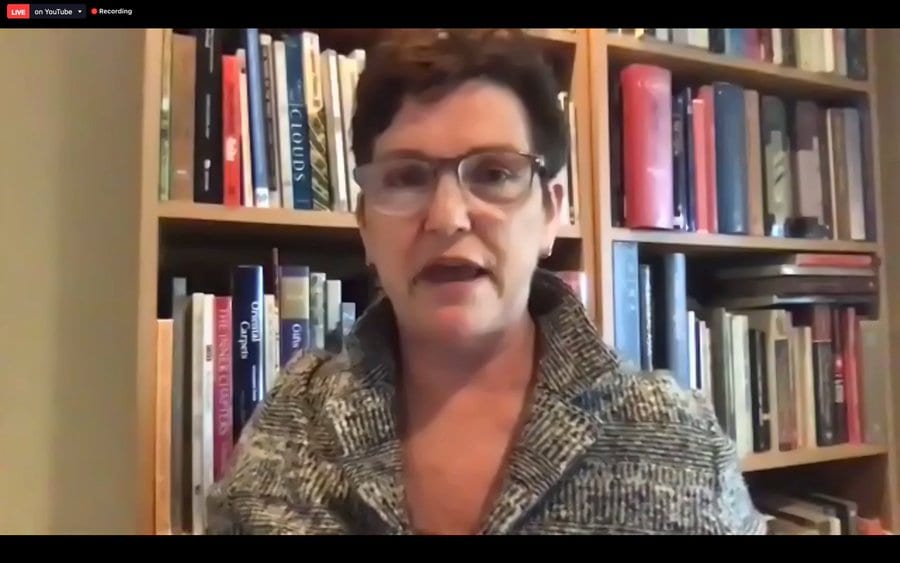 Maria Giese during the panel.

The discussion started with a little background about each speaker and their relation to the media world. Maria began her pursuit of equal rights when she realized her union wasn’t in favor of equal representation and she saw what went on in the larger scale of U.S. entertainment media. Since her involvement, there has been a 130% increase in women directing episodic TV and a 600% increase in women film directors. My mouth literally dropped at these numbers. I thought it was bad now but I never realized just how bad it had been. Of course, even with that amount of increase, women’s roles behind the camera are much smaller than men’s. This was an epiphany moment for me, reminding me that this activist work (protesting, lobbying, creating) does make such a difference and that we need to continue to do it.

There is still so much left to do, particularly in the realm of storytelling. In the words of Geise we need “a total paradigm shift, to change the thinking about all of us… entertainment media is all of our stories and we are not allowed in it.” She also pointed out an important piece in the narrative of storytelling, saying “I’m not saying men shouldn’t tell women’s stories, we should all tell whatever stories we want and no one should be restricted about telling anything we want; [but] mostly, women are made to look terrible. Women are fragmented and humiliated in the way they’ve been portrayed [by men].” All voices are important, and that is why all voices need to be present. Mitchell added to the conversation on storytelling by talking about what representation means and the harm that fragmentation does: “We’re the ones being told that the way in which we see the world is problematic; the race narratives includes who I am, I cannot separate my race from my gender in any instance, yet in storylines, that’s what girls are being asked to do: show up as one part of yourself so people can relate to that part of you.” The media controls the narrative, and when a story is coming from the perspective of villainizing particular groups of people based on their identity, it tells those being villainized that they are wrong, when their lived experience is each person’s truth. Stories need the perspectives of intersectionality, period.

Halleck commented on this same topic of storytelling from the lens of public access television stating “Paper Tiger [Television] was started so it became a habit to see [content] every week and help promote public access; that’s one of the most important democratic systems.” She explained that public access television is problematic in and of itself since companies who fund television do have a say in what content is put out, saying “they don’t have women’s liberation or empowerment in mind.” She gave us hope, though, when she discussed the ways in which some institutions are reacting to the pandemic, in media centers women are taking over and helping people who are having trouble using software such as Zoom. She told of “a woman [who] hung up shower curtains in between the editing stations in order to help people [learn] how to do a PowerPoint and teach people how to work within zoom and current media outlets.” Supporting each other in the community is crucial. 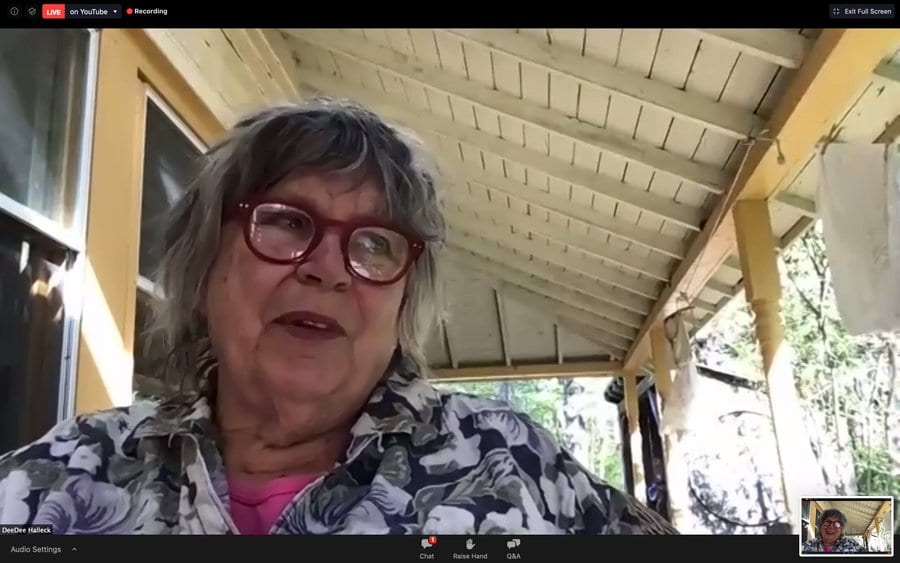 DeeDee Halleck during the panel.

Stories such as these, where community is formed through public access, lobbying for the betterment of institutional systems, and creating our own content in the midst of a crisis, give me hope that feminism is alive, well, and fighting. As Mitchell said, “Now we have people with their own phones and blogs” to tell stories from their perspectives, creating agency despite mainstream media’s single-perspective stories. All three speakers expressed the importance of democratization of the media and I have to agree: we hold power in the very devices we use to watch, read, listen, and create with.  Now let’s use it!.

You can watch the webinar yourself and soak up all of the information they talked about. As a young filmmaker, writer, and voter, this webinar gives me hope that my own strides so far really do make a difference in the fight for equality. I have so much hope in the sisters before me and for my own generation to continue the process of democratizing media; our stories as intersectional people need to be told and listened to. So let’s make this content and make a serious, intentional effort to listen to the perspectives that are not typically told. Halleck said it best when she said “it’s very important that we work together, we cannot make change alone. We need that sense of a cohort.” So let’s rethink sisterhood and take an active part in how we can collectively tell the stories that need to be told.

You can learn more about Generation Ratify on their Website, Instagram, and Twitter and watch the first, second, and third webinar on YouTube channel. For more information, check out our pieces on the first panel, the second panel, the fourth panel, the fifth panel, and the “Rethinking Sisterhood” series, and learn more about Tiffany on her profile.