Affecting Feminist Change During a Pandemic: A Roadmap to Activism

This piece is part of a series on the “Rethinking Sisterhood” webinar panels. Take a look at our articles on the first panel, the second panel, the third panel, the fourth panel, and our article on the series as a whole for more about Mrs. America and activism.

In a time where social justice and human rights issues are on the forefront of everyone’s minds, not to mention social media streams, a reminder of how these efforts work and affect change is crucial. For the final webinar in the “Rethinking Sisterhood” series, moderated by Akhila Mullapudi, panelists Rosie Couture, Ariel Dougherty, Alexandra Hidalgo, and Barbara Ann O’Leary joined forces to discuss the topic at hand: “Approaching filmmaking and content production from a feminist perspective to create change.” All four women are experienced media content creators whose voices have affected change in their perspective communities. Rosie Couture is a 16-year-old sophomore from Virginia, who is the co-founder and Executive Director of Generation Ratify, a movement to ratify the Equal Rights Amendment. Ariel Dougherty is an independent filmmaker who in 1969 co-founded Women Make Movies, a distributor of independent films by and about women. Alexandra Hidalgo is a Venezuelan filmmaker, assistant professor at Michigan State University, and the editor-in-chief of this publication. Barbara Ann O’Leary is a filmmaker and catalyst of the #DirectedbyWomen movement on social media. 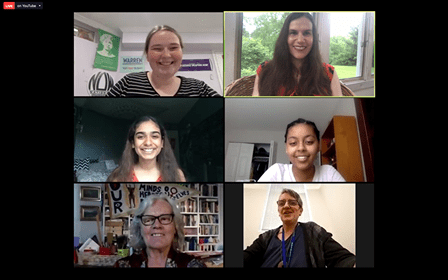 A “group photo” of the panelists.

If I was 16, in a panel of seasoned activists, intellectuals, and filmmakers, I would be freaking out the entire time. Rosie, however, not only held her own, but brought a fresh perspective on the issues at hand. For me, as someone who works running social media accounts—the ones for our publication and the ones for Michigan State University’s Innovation Center—she hit the truths that I have found through my work on the nose. She discussed social media as a tool to get young people to engage with issues, such as the ratification of the ERA or the Black Lives Matter movement. She explained that she discovered the issue of the ERA not through social media, but through her own research. However, this is research that not many young people would go out and do on their own.

“As a young person, immediately when I think of media my mind goes to social media,” Couture said. “I think social media is one of the most powerful tools we have to engage young people to make change.”

Through social media, Generation Ratify, the group she co-founded, has brought significant coverage on the push for the ratification of the ERA. She has built a community of like-minded people on these social media platforms, who are all rallying behind the push for the ratification. She, as soon as the webinar ended went out to protest George Floyd’s murder alongside thoudsands of fellow activists, mentioned how vital it is to turn likes into action and Tweets into change.

Dougherty gave us a brief overview of the history of women behind the camera, specifically women of color and the role they have played in the development of filmmaking in the US. She clarified that there are three spheres of filmmaking: the corporate/Hollywood sphere, the independent sphere, and community media (everyday people using the tools of media to tell the stories that matter to them). Women have been blocked from corporate spaces for almost a century. African American women filmmakers, like fellow women of color, have hurdles they must jump through that are nonexistent for white men. Even women of color who had widely successful films, like Julie Dash with Daughters of the Dust, rarely have their success translate into a sustainable career in Hollywood. Dougherty pointed to Ava DuVernay, a African American film director, as one of the few women of color to break into the corporate sphere of filmmaking and celebrated DuVernay’s Array independent film distribution and resource collective as the kind of initiative that will get women’s voices on the screen. 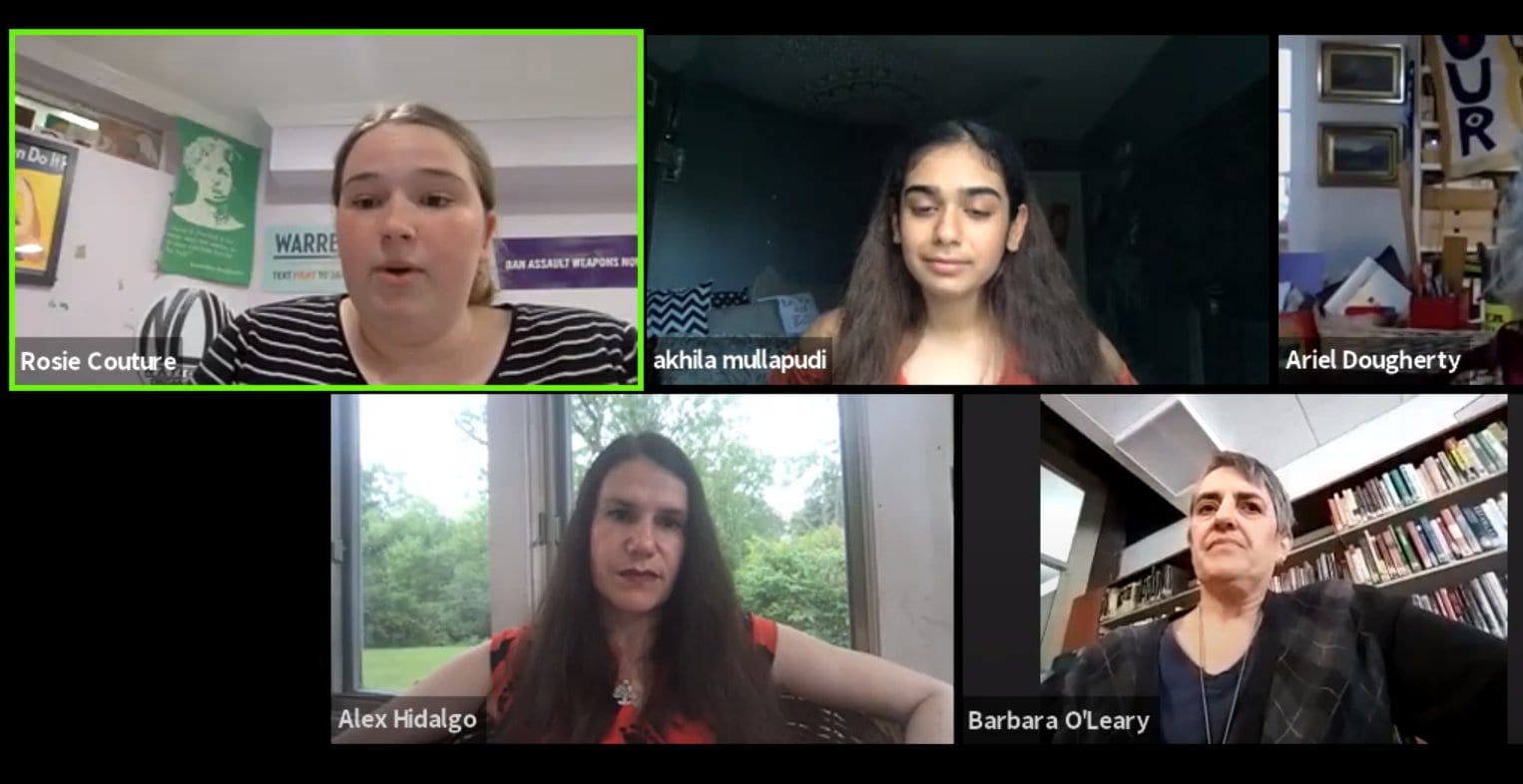 Rosie Couture during the panel.

Dougherty concluded by saying there are many things that can be done to begin leveling the playing field, however, “policy is the most important and overlooked area that needs our attention.”

One policy that could help to even field is the ERA. It is one of the key policies that could inspire change such as this. The effects of the ratification of the ERA and the recognition of women as equal citizens will bleed through and positively affect the film industry.

Hidalgo discussed how we can start affecting change toward more diverse content within our own media production. Whether it’s news reporters, filmmakers, TV show creators, YouTubers, or social media influencers, straight, middle class white men tend to be more influential than other groups. As they are the ones running the mainstream media, they are the ones who determine which stories get told and what perspectives are considered compelling, valuable, and marketable. These stories and perspectives often dehumanize minority groups, and the moment you take someone’s humanity away, their murder, as George Floyd’s murder shows, can go unpunished as so many murders of African Americans by law enforcement officers do. Hidalgo encourages us to start making changes by rewriting this narrative through our own media production, whatever form that might take.

“It was only when I became a filmmaker that I realized that the people behind the camera are just as important as the people in front of it,” Alexandra said, explaining that we become mesmerized by we see on the screen but that it is the ones directing, writing, and filming the content we see who control the narratives and fates of those we fall in love with onscreen

As a result, Hidalgo encourages those wanting to make media to invite diverse people to fill as many positions as possible behind the camera. Having voices from diverse people on your production will strengthen it, as it will bring perspectives you might not have considered to the forefront. Lastly, she says we must stand behind the work those in our communities are doing and promote it. While changing policy might be a long, tedious process, creating and spreading the word about our own content will start to turn the tide right away.

O’Leary, the fourth panelist, emphasized the importance of highlighting the voices and work of women all over the world.

“One of the biggest challenges we have is that women’s work is not received in the way that they should be,” she said.

She discussed building a culture of appreciation for the work of women filmmakers, which she exemplifies through her social media platforms. For anyone who hasn’t visited the Directed By Women Twitter page, O’Leary works tirelessly to highlight films made by women and has compiled a list of over 13,000 women directors since she began the initiative. She believes in the importance of moving away from what the mainstream media says is good and the films they claim are important to consume, and instead find those films for ourselves, and supporting them on whatever platform we might have access to.

For me, this webinar was both eye-opening and reaffirming. As a college student who wants to join the film industry and currently works as a social media specialist, this webinar reminded me of why the work I am doing is important and necessary. Putting feminist content out into the world, told by and for other feminists, is one way that I can affect change, even while stuck inside during a global pandemic. Even if you don’t have a big social media presence or plan to work in the entertainment industry, you too can affect change by being conscious of whose voice you decide to raise and whose you scorn.

You can learn more about Generation Ratify on their website, Instagram, Twitter, and YouTube. Learn more about Kara on her profile. Read more about the other panels in this series by going to our articles about the first panel, second panel, third panel, fourth panel, and our piece on the series as a whole.