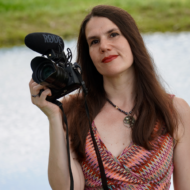 Alexandra Hidalgo is an award-winning Venezuelan writer, filmmaker, theorist, memoirist, and editor whose documentaries have been official selections for film festivals in 15 countries and been screened at universities around the United States. She is the recipient of From the Heart Productions’ inaugural “Carole Joyce Award for Excellence in Documentary Storytelling.”. Her videos and writing have been featured in The Hollywood Reporter, IndieWire, NPR, The Criterion Collection, and Women and Hollywood. She has a PhD in English from Purdue University and an MFA in Creative Writing from Naropa University and is associate professor and Crow Chair of English at the University of Pittsburgh. Her video book Cámara Retórica: A Feminist Filmmaking Methodology for Rhetoric and Composition received the 2018 Computers and Composition Distinguished Book Award. Her scholarship has been published in Kairos, Composition Studies, Enculturation, and Peitho, among others. Her video essay, “Motherhood on the Screen,” received the 2020 Kairos Best Webtext Award. She is co-founder and editor-in-chief of the digital publication agnès films: supporting women and feminist filmmakers and of the peer-reviewed journal constellations: a cultural rhetorics publishing space.