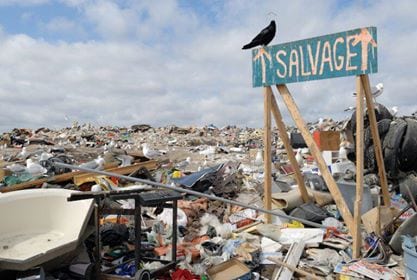 In the small town of Yellowknife, Canada, is a community of people who are brought together by one common thing.

Amy C. Elliott’s Salvage is a feature documentary about the salvaging community in Yellowknife. Yellowknife has one of the last dumps open to the public. Members of the public go to the dump to find furniture, clothing, food, and more. In this small town, there are not many stores and the cost of living is high. Going to the dump to find items that would otherwise cost the residents a lot of money is a point of pride for the community.

This documentary brings you into the world of these salvagers. Many were charming and optimistic people who saw the dump for the resource it really is. Their resourcefulness and creativity is something I am in awe of. The things they found and were able to reuse or repurpose was truly astounding. If their cars broke down, they could go to the dump to find a replacement part. They found furniture and clothing that were still in great condition. People found items to repair and resell or donate, such as stuffed animals, handmade moccasins, and bikes. I couldn’t help but think to myself: if the apocalypse ever comes, these are the people who will survive.

This film is shot using mostly hand-held cameras, with the exception of the interviews. Shooting in the dump using a hand-held camera added to the chaotic atmosphere of their environment.The interviews took place in the salvagers’ houses, where the camera was placed on a tripod to show the stark difference between the dump and the stability of their homes.

The way the film is edited really allows you to see the dump for the treasure trove it is. There were several moments when the film would show a long shot of a salvager in the dump, surrounded by what, at first, looks like complete junk. Then it cuts to the salvager’s point of view, showing us the things they find which still have value. Bicycle parts, nails, toys, cans of food, and more were all salvaged. This was a clever way to take the viewer out of their comfort zone and into the eyes of the people of Yellowknife.

I also really enjoyed the sound of this film. There are seagulls constantly crying in the background while at the dump. Without this ambient sound, the place would feel lifeless. Additionally, I thought the music fit wonderfully into the film. They use a non-intrusive acoustic soundtrack that adds to the overall atmosphere by playing up the quirky nature of the dump and this town, and it feels very natural in these settings.

The film’s overarching theme is that we need to be more conscious of how we treat our material possessions. Many of the things people throw away are perfectly good items that could be used by someone who might not have the funds to buy them new. There is a mentality in our society that those who salvage are poor, somehow lesser, or “hicks,” as one man describes himself, but that is not the truth. They are incredibly resourceful, united in helping one another, and conscious of how material possessions are treated. The film highlights how our society has fallen in love with the convenience of trashing things that we no longer see a use for, even when said thing is still perfectly good. It is much easier to throw things in the trash than to recycle, find another use for, or take them to a donation center. It seems we have forgotten the saying “one man’s trash is another man’s treasure.” Salvage does this by giving us a peek into the lives of the salvagers and showing us all the ways in which they are able to use “trash.”

Over the course of the film, we learn that there are attempts by the government to close the dump and stop the salvaging. Having people in the dumps can be a liability issue, which the dump manager explains by discussing some of the ways people have been and could be injured. I do wish that there had been an interview with one of the officials who wanted the dump closed, so the audience did not have to solely rely on those who would be affected by the decision for this information.

I was fortunate to catch a screening of this at the Michigan State University Recycling Center where we watched the film on a screen hung from the baler, surrounded by piles of cardboard and plastic. It truly reeked in there, but it allowed for an immersive experience that I would not have gotten anywhere else. Afterwards, Amy C. Elliott answered questions from the audience about the filmmaking and about Yellowknife. She was incredibly receptive to questions, and you could see she had a lot of passion for her film.

Salvage is an eye-opening experience that allows the audience to see the world and their possessions in a new light, and I highly recommend it.