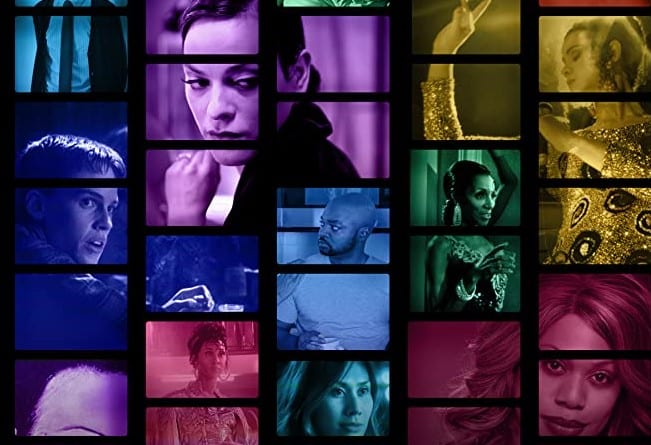 Just over six years ago in June 2014, Laverne Cox appeared on the cover of Time Magazine along with the title, “The Transgender Tipping Point: America’s next civil rights frontier.” Cox had achieved mainstream success with a lead role in the Netflix Series Orange is the New Black, making her one of the most recognizable Hollywood figures to come out as transgender.

Yet Cox reminds viewers in Disclosure, the recently released documentary about trans representation in film and television, to be careful when some trans-identified people are elevated while others continue to struggle. Her own elevation—illustrated in the documentary with an image of the Time cover— is only as useful as the attention it affords other transgender people. Her point echoes the major theme of the film: media representation is just one facet in securing transgender acceptance.

Disclosure offers an impressive sample of film and television clips culled from over a hundred years of moving-image history. These clips provide illustrations of trans representation throughout the existence of the medium. Visually, the documentary centers and esteems its commentators in sparse, beautifully lit settings. The editing between interviews and film clips is fluid, allowing for seamless movement between topics of gender representation and cinematic examples of such representation. While the interview can often slow a nonfiction film’s narrative, the personal interviews in Disclosure are riveting and their presence is vital to personalizing the dialogue between subject and viewer.

Even more impressive than the breadth of the film catalog highlighted in Disclosure is the documentary cast — a star-studded lineup of actors, media makers, and scholars who all identify as trans.

The documentary weaves between clips and interviews that range from insightful to introspective. As the film moves through the cinematic history of trans representation, interviews provide reactions and personal reflections.

The film begins with a short montage of clips from recent film and television that highlight actors talking, singing, and embracing. There’s nothing particularly remarkable about these scenes until Laverne Cox’s voice offers, “I never thought I’d live in a world where trans people would be celebrated on and off the screen.” With that statement, these opening clips become monumental. Banal in any other context, they’re elevated when Cox points out that we’re watching trans lives as multi-dimensional humans rather than as caricatures.

Cox, actor Bianca Leigh, and actor Jen Richards all discuss their own introduction to trans identities on television. Starved for a reflection of themselves on the screen, they encountered transphobic stereotypes that sparked self-hatred. Clips from The Jeffersons, Twin Peaks, The Lucy-Desi Comedy Hour, and other programs illustrate prime time examples of negative trans representation — the very images that confounded Cox and others in their youth. In one scene from The Lucy-Desi Comedy Hour, we see an actor in women’s clothing awkwardly descend a staircase, heeled shoes buckling under his missteps. The audience roars, confirming that the trans character is someone to be laughed at, not celebrated.

Reaching back even further in cinematic history, scholar Susan Stryker uses an example from the D.W. Griffith film Judith of Bethulia to illustrate how the use of the first cinematic cut doubles as a signifier for the castration of a eunuch character in the film. Stryker explains, “It’s like trans and cinema have grown up together.” Documentary filmmaker Yance Ford expands the discussion, remarking on how D.W. Griffith was not only racist via Birth of a Nation but that he also understood “how gender non-conforming characters can be turned into the joke” of a story. Stryker points out how, from this early point forward, films often perpetuate the negative portrayal of both Black and trans identities through vilification and humor.

Cox takes this further by discussing the history of emasculating Black men in America through lynching and castration. This emasculation occurs on screen by putting a dress on a Black male body in a context that solicits audience laughter. This trope deflates the power of the Black character and amplifies both white supremacy and heteronormativity.

Disclosure does the important job of identifying moments and tropes in screen history that work against the positive portrayal of trans lives. Objectifying trans women, casting cisgender men in trans roles, and focusing on violence against trans people have had a palpable effect on the misunderstanding of trans lives and experiences. Cox shares the statistic that an estimated 80% of the American population has not met or does not know someone who is transgender. Thus, knowledge of the trans experience is based largely on media representation. This makes the misrepresentation of the trans experience particularly dangerous.

After surveying the history of the media’s representation of trans lives, Disclosure also considers the gains made by trans actors and storytellers. The television series Pose, Sense8, and Transparent all prominently feature trans characters and production crews. Actors who once remained closeted, like Sandra Caldwell, are now out and remain employed. It’s a promising moment, but one that can only be fueled by further trans acceptance.

Positive trans representation on screen was not easily won, and, unfortunately, there’s no certainty that it will be maintained. Interviewees remind the viewer that trans lives need to be consistently represented both in front of and behind the camera. Ultimately Laverne Cox’s appearance on Time Magazine’s cover signals change. It’s her roles as advocate, activist, and executive producer of Disclosure, however, that ensure change has continuing momentum.

Disclosure is available to stream on Netflix. To connect with Julie, take a look at her profile.