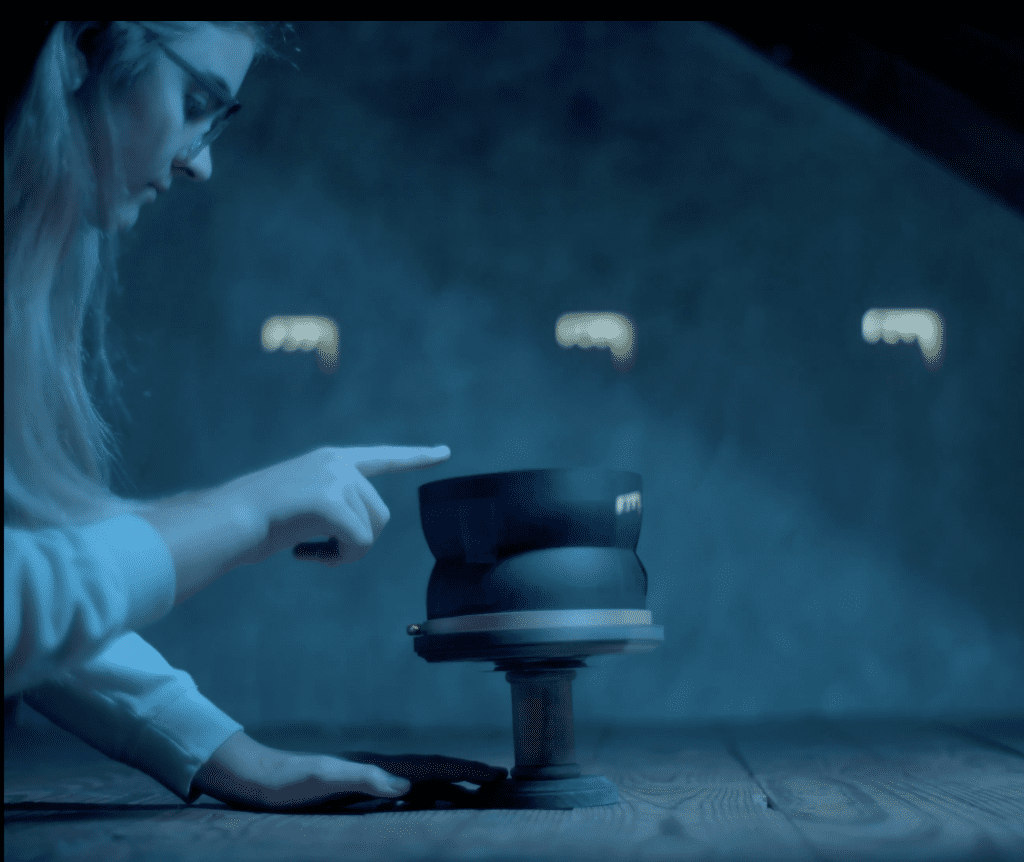 A small, handcrafted metal cylinder with slits around it rests on a wooden pedestal, surrounded by tools on a wooden table. Two hands reach for it, bringing it up to a blurry face. As the focus shifts from the metal zoetrope to the person, we see our curious protagonist. There is no questioning the clever parallelism of the name “Zoe” in this 2018 short film, directed by  Noorman Wicaksono. The character Zoe is entranced by her discovery of an old zoetrope and is, in fact, haunted by the happiness it reminds her of.

The film takes a brilliant risk as it handles one of the first technologies in moving images. A zoetrope is a type of moving picture, where the film is set in a drum-like cylinder. When it spins, the zoetrope creates the illusion of movement with the pictures. In Zoe, the images in the zoetrope are projected around the room. The zoetrope plays a big role in the feel of the film. It is a centerpiece for the short, a tangible that can be returned to. It symbolizes both the cycle of life yet feeling stuck in one place, and the hope for movement in a seemingly stagnant lifestyle. Not to mention the personal connection the character Zoe has with this Zoetrope.

Right from the beginning, Zoe brings its audience into a place of both wonderment and familiarity; the aesthetic of a Super 8 film mixed with hazy sepia-toned colors brings a cold mood to this almost dialogue-free film. We start with a close-up of a door, its window slightly cracked. It is a peaceful image, but not quite welcoming until the door is opened by a teenage girl. We learn her name is Zoe when a female voice calls her to dinner. The colors and images of Zoe take its audience to a memory-like state as if we as the audience remember Zoe’s memories as she does: quick, fleeting, melancholy, only to be brought back to the daily repetition of the unfortunate present. The ambient sound emphasizes this feeling. If sound can be lonely, it was captured in this film with the melodic chirping of birds outside.

The story of a drunk, emotionally absent father while the mother struggles to make ends meet, all observed by their child, is exquisitely told through the Director of Photography, Eurica Yu’s, style. Although the trope is somber, this story also includes in-between moments of sincerity and serenity. Life depicted in Zoe shows the hardships of a family struggling to bond but also the reflective moments of smiles shared over distant memories. Wicaksono and Yu take us on a journey of a child who wants her parents to be in love and to love her by creating an atmosphere which welcomes Zoe’s audience into this family’s daily life. These seemingly small day-to-day moments make up the entire film, symbolized by the memories curated by an old Zoetrope.

Stylistically, this film is timeless. Shot in 2018 but depicted as an old picture, it gives the feeling that this story was told, is told, and will continue to be told as Zoe’s life unfolds. We are invited to dwell inside a consciousness of wanting so badly for life as a teenager to not be what it is. The cinematography is remarkable with perspective shifts represented with camera angles, close-ups to individuals’ faces giving the sense of isolation within the family, and long shots to show further isolation within a great span of space. The audience gets to feel Zoe’s loneliness by the literal space separating her and her schoolmates in a shot of her walking in her high school’s bleachers. A group of girls sits together on one end while Zoe enters, alone, from the other. When she looks at them, they get up and join more friends, leaving Zoe to watch them walk away. She wants to be a part of any family at all but does not receive that at home or at school, a feeling expertly communicated through the camerawork.

As for the name “Zoe,” the character Zoe stumbles upon a Zoetrope with a message on the underside. The phrase, which is also the first words of the film, is “for my girls, what is broken can be fixed.” It seems to echo in the back of the mind through the entirety of the film. The anticipation for this broken home to reunite seems like a fleeting hope. Each time her parents fight, Zoe returns to her newfound device. She watches the images circle around her, flashing the slightest animations which continue to speed up, interweaving with imagined flashbacks of when her parents were happy, then back to the projected images. Finally, overwhelmed, Zoe is brought back to her state of yearning for a flicker of happiness just as the Zoetrope illuminates its flicker of dancing patterns all around her.

At a little over 12 minutes, this film captures the hardships of a struggling family and the hope that a broken family may be fixed. The zoetrope spins in the time of remembrance and in the time of collective loneliness; what happens when Zoe’s family tries to keep spinning? Watch Zoe so you can find out for yourself.

Learn more about Tiffany by visiting her profile.