Review of Javier Augusto Nunez’s The Fifth of November

A haunting soundtrack, an emotional performance, and one unforgettable narrative coincide to create Javier Augusto Nunez’s stunning short film, The Fifth of November. Nunez co-wrote this piece with the star of the film, Qurrat Ann Kadwani. With their combined artistic vision, the film encapsulates the immense and complicated nature that festers within the psychiatric interior of Jane Evans—a survivor of a mass shooting.

The film’s protagonist, Jane Evans, is a young professional woman of color with a determination to stay quiet and get things done. Played by Quarrat Ann Kadwani, Jane’s character is seemingly focused and well-kept; she keeps her head down and stays quiet, but as the film’s events and flashbacks play out, it’s clear that she hasn’t always been this way.

We catch glimpses of Jane’s psychological interior in her opening scene. A melancholic and eerie soundtrack guides us through the empty hallways and living spaces of her home. She remains silent as she prepares for her day ahead, but her eyes are glued to the television as a news reporter discusses the horrific and all-too-true statistics of past and present mass shootings across the nation. The reporter touches on the fact that the numbers of these shootings continue to increase each year, with over 50% of the shooters being white males, but “still, the government does nothing.” The cool tone of the atmosphere is evenly matched by the emotional piano soundtrack, and Jane’s heavy expression resonates with viewers—is she merely drained by the fact that these events keep happening, or is it something more that haunts her mind? It’s unclear, but as she makes her way to work, we’re able to hear her voice for the first time. 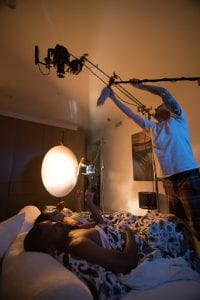 The performance of Jane’s coworker is familiar to us all. This deskmate is a Chatty Kathy who loves to fill the silence from Jane with the details of her own life; she’s much too busy with her husband and child, and praises Jane for her ability to enjoy her time alone as a single woman. Jane’s forced smile alludes to the fact that underneath, she’s not alone…someone at some point had a large impact on her, and we can see that her romantic independence was not necessarily an intentional choice. When her coworker allows Jane a chance to speak, we learn that Jane’s birthday is tomorrow: on the fifth of November. As Jane speaks of this, we see a broadcast behind her announce that tomorrow marks the one-year anniversary of Scott Logan’s disappearance. The broadcast showcases a photo of the missing man and urges anyone to speak out and come forward if they have any information. The subtle intentionalities in this scene (amongst others) attest to the quality of this film. Every word and shot has a purpose and builds upon the background of our main characters. Through visuals, audio, the editing, or a combination of the three, viewers are able to remain focused and invested in this tense and emotional narrative. This effect only heightens as the film goes on, the next scene adding drastically to the emotional connection that is offered through Jane’s backstory.

After Jane’s time at work, we’re carried throughout the past and present moments of her life as we travel back and forth between the present day and haunting flashbacks that run through her mind. In the present, we keep up with Jane as she runs throughout the city; she remains focused, unwavering, and on pace, and as such, we can still read her as a focused and reserved figure, keeping audiences (and other characters) at a distance. It’s not until this present-day run is interrupted with a flashback that we see her break down her walls a bit. In these intermittent flashbacks, we’re introduced to her boyfriend, Zachary Williams (played by William Bryant Jr.) who, on the same day a few years prior, proposed to her while on a date for her birthday in an elegant restaurant. After this engagement, we’re carried through other flashbacks focused around their relationship: we celebrate their moments of joy and empathize with them during their occasional fights as a couple. Whether her flashbacks represent moments of heartbreak or feelings of euphoria, these flashes of her past are displayed in beautiful, saturated color. Each flashback contains more contrast or warm tones than the shots of present-day, thus reinforcing a sense of elation and nostalgia that Jane connects to her past. As an audience, we can relate to this romanticization of the past, and therefore, can connect even more to the memories and experiences of Jane and Zachary as a couple.

After being carried through the various snapshots of their relationship, we are placed back into the night of their proposal. Still high from the romance and unveiling of her ring, Jane leaves momentarily to use the bathroom, but as the night continues the film begins to take a turn. As an audience, we are carried into a complex and painful narrative that is impossible to look away from. With a rollercoaster of emotions and suspense, the film creates an experience for viewers to place themselves within Jane’s shoes as she undergoes moments of complete elation and times of utter remorse. Kadwani’s acting throughout the film is realistic, daunting, and admirable. Her performance gives a voice to those who harbor anger, confusion, love, joy, and pain, and as such, creates an immersive experience for all audiences, allowing viewers to see so much of themselves in her portrayal of Jane’s character. 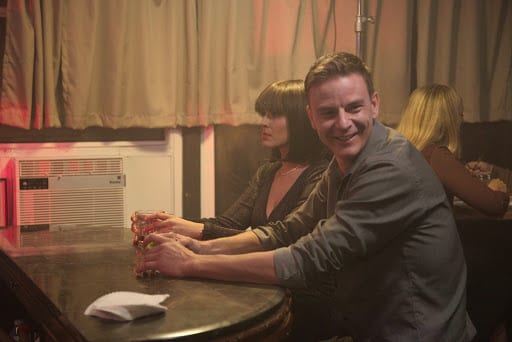 Shaw Jones plays Owen, who represents the potential of a mass shooter to Jane.

With Nunez’s direction, the framing, acting, sound, and stylization of The Fifth of November  gives viewers an opportunity to feel and absorb the broken and mending interior of Jane’s character. Her emotional and physical reactions to loss and heartbreak are powerful, authentic, alarming, and understandable. How can one grasp a reality that is entirely made up of lament? Is it possible to react in a calm and civil way when someone close to your heart is taken away by an inconceivable hate crime? Why are these situations happening with such consistency in our real world? How can we begin to understand the impact these violent crimes have on our friends and neighbors? Nunez’s film and Kadwani’s performance begin to unpack these questions, and their approach to this subject is impactful due to the jarring nature of this narrative. The truth is that these instances happen in our country with regularity, and they are violent, unfair, and horrifying. The Fifth of November recognizes this and does not sugarcoat the effects these crimes can have on survivors. Nunez and Kadwani use art to express their pain, connection, and passion to these events, and with their guidance, we are able to dive deep into the mind of an individual who attempts to cope with unjust loss.

You can learn more about The Fifth of November on IMDB and you can watch the trailer on Vimeo. Keep up with Qurrat Ann Kadwani on Instagram, Twitter, and Facebook. Find out more about Javier Augusto Nunez on his website. Read more of Olivia’s writing on her agnes films profile.