Review of Irina Varina’s Us, Forever Ago 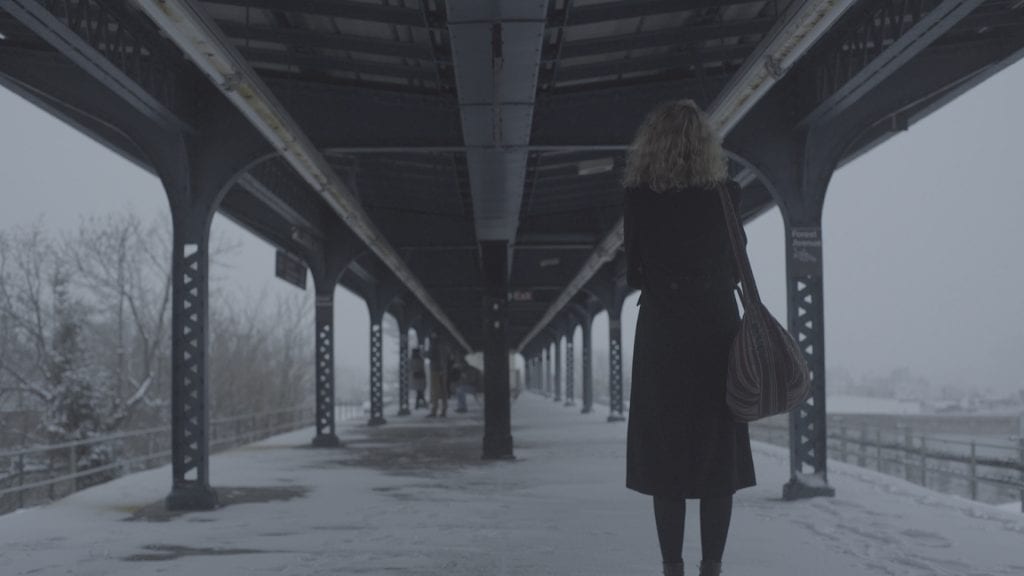 “Do you ever think about the past too much?”

Us, Forever Ago is a film about a young woman filmmaker, Irina Varina, who is looking back on her life from the year 2030. She is reflecting on a period during 2015-2017, while she was creating a film about female artists. Director Irina Varina plays the main character of this film, and at first I thought she was playing herself, but her character is never given a name. She is credited as playing “Woman.” Us, Forever Ago isn’t quite a documentary, nor is it a fiction film. It is a blend of genres, coming together to create a unique experience.

The film features two scripted characters and four interviews. The interviewees are from the film the woman is creating. In their on-camera interviews, they talk about their art and their lives, each reflecting a part of Varina’s own creative process and life. The artists all partake in different art forms, some drawings or paintings, some performance.

The film plays with time in a risky way that, on paper, probably shouldn’t work. The narrative is hard to pin down because of the way time and memories are utilized, yet it somehow — in a way I don’t quite understand and I can’t quite explain — works. The film tends to jump around because all of the scenes are exactly as Varina remembers them, she doesn’t fill in any gaps. In this way, the film plays with the concept of memory. At times the story is hard to follow because of this style. The narrative becomes muddled or lost at moments. It is hard to establish a timeline in the film because it is told from the perspective of memory. We are inside her mind without having her insight of the rest of her life and how the gaps in her remembrances are filled. It is a trippy and enriching experience, a powerful experiment for both filmmakers and viewers.

The film, like a person’s memory, is consistent in both theme and tone despite this perspective. Varina does a beautiful job of portraying a woman on an artistic quest without a definite end goal. She feels uncertainty with her film, saying she doesn’t know what it’s about or what the ending will be. Us, Forever Ago illustrates the ups and downs of the creative process. This film is a reflection on how we look back on our creative endeavours.

Varina chooses not to include music in her film until the credits. The movie is not lacking for it; in fact, I didn’t notice this when I first watched it, as Varina replaces any silence with ambient nature and city noises. This choice to omit music ties back to the film being told through the perspective of memory. Our day-to-day lives do not have a soundtrack, so Varina emulates this by not including one, either. It is a bold choice that added a great touch to the way the story is experienced.

The end stumped me, to say the least. I won’t say if we learn how the woman’s film ends up, or if she finishes it at all. But then again, this is not a story about endings. Nor is it a story about beginnings. Instead, It is a story about the in between. The highs and lows, the fear, the confusion, and the uncertainty in putting all your creativity and time and effort into one thing, without a clear future for the project.

Visually, this film was incredibly appealing. Varina uses a muted aesthetic, emulating how we remember things. She plays with perspective and colors resulting in unique shots. She is very purposeful with the way she frames her shots, and it is apparent to the viewer that Varina puts love and affection into each one.

Interestingly, the interviews that make up a large portion of the film are framed in a way that could seem unprofessional. The audience is shown uncomfortable close-ups and oddly framed shots. Given that Varina is incredibly skilled behind the camera, this artistic choice is striking. It is as if we are seeing the interview from Varina’s eyes instead of from the camera. We initially focus on the interviewee, but we also see how their eyes search the room and nervous movements of hands and feet. This gives a much more personal feel to the interviews, placing the viewer in the room with Varina and letting them explore more of the world of these women than a traditional interview shot would.

This film has a lot of elements artists can relate to. Varina relies on the things her characters say, their ways of creating and being, to be the things that reach us. There were moments that I did not understand. There were times I lost the plot. But for all those moments, there were ones that reached me. There were moments that I knew were for me, and for people who create and think like me. Those other moments I did not understand were the moments meant for others. I personally related to Katie Frank, one of the women interviewed in the film. She allowed her doubt about her art to be shown in her interview. She felt approachable and real to me, and what she said allowed me to reflect on my own creative process as a filmmaker. There is power to a film that helps you think about your own work in that way.

Us, Forever Ago has a moment for every creator, every artist, every person struggling to make it in this world. You just need to watch, and it will reach out to you.

You can learn more about Us, Forever Ago on the film’s Facebook and watch the trailer on Vimeo. You can watch the film on Amazon Prime. To see what else Irina Varina has done, take a look at her Instagram and website. Learn more about Kara by visiting her profile.