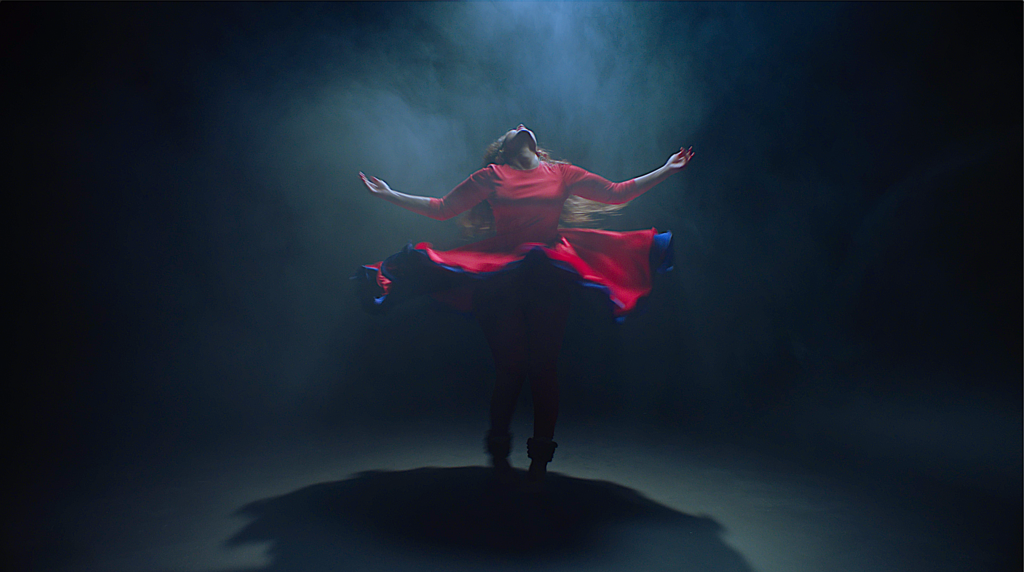 The Dancer (Shalini Bathina) who haunts Tina throughout the movie.

When the screen opens with a silhouette of two friends overlooking a calm river and a warm skyline in the sunset, you don’t expect the next 9 minutes to leave you in a haunted state of second-guessing your own thoughts.

Gayatri Bahl has brought together an all-female cast for her film. Tina has four actors and is an all-encompassing story of womanhood. Bahl herself plays Tina and casts three other women. Shalini Bathina brings an exciting energy as The Dancer, showcasing traditional Indian dance on the screen. Surina Jindal plays Sam, Tina’s confidant and friend. Finally, Dr. Jane Friedman is played by Sarah Baskin, a convincing actor who adds an urgency of suspense to the film. To be able or naturally write, cast, and direct a story of femininity and feminism is, in and of itself, a feminist feat. Bahl takes the genre of suspense and mixes it with feminism, modernity, Indian traditions, and classical Indian dancing to produce an exciting and thrilling experience for its audience.

The film begins peacefully, but it’s obvious something is a bit off. Tina, the main character, is awakened by a bell chiming into an echo. The closeup shot of the bell transitions to hold on Tina’s face. We see her hesitate for a moment, open her eyes, and smile. Her therapist, Dr. Jane Friedman, is present, welcoming Tina back into consciousness with a soothing voice. The pastel colors of the room and the easy natural lighting should indicate serenity, but Bahl makes use of overly close shots and eye-level camera angles to create an uneasy sensation that something is off, almost as if someone else who is not invited is in the room with Tina and her therapist. Tina’s anxiety is her thought-to-be failure in her therapeutic process of rewiring her brain. A shot of the book that introduces this therapy is entitled Rewire Your Brain: The Modern Woman’s Guide to A Fulfilled Life, written by her own therapist, Dr. Jane Friedman.

As the film progresses, we witness Tina being haunted by bells — bells later revealed to be attached to an Indian classical dancer dressed in a red flowing dress and traditional dance makeup painted on her face and feet. She teases Tina, sometimes dancing around the corner, enough for Tina to recognize the bells and still be just out of reach; sometimes the dancer is either right behind her, traipsing back and forth in a gracious sprint. She is gorgeous and torturous to Tina. She begs to make the dancer stop, but no matter what, the dancer continues to return.

As the story moves forward, Tina is haunted by hallucinations throughout her day and into the night. The therapy Tina is getting seems to work only in the moment, but in the greater scheme of things heightens the amount and detail of this pervasive spirit that keeps visiting her. She—the woman, dancer, delusion, spirit—begins as a sound. Slight bells ring and each time, Tina turns her head towards the sound in surprise, and finds nothing. Until she does. She sees red cloth here and there flitter around corners. She sees bells, then sees the feet and wrists they are attached to, painted with alta. Alta, similar to mehendi or henna, is commonly used in traditional Indian religious and marriage ceremonies to show the beauty of the feet. Alta is an “inherent adornment” for most classical Indian dances, though I myself am not scholared or keen enough to recognize the specific classical Indian dances performed in Tina (there are 8 total: Bharata Natyam, Kathak, Kathakali, Kuchipudi, Manipuri, Mohiniyattam, Odissi, and Sattriya). Tina sees her haunter in the streets, far away, yet cannot capture her on film. She runs away from her friend whom we meet a few times throughout the film, just to chase after the sounds of the bells, dress, Alta, dancer. She becomes fixated: this dancer, whose impact once seemed so miniscule, now traps her in her own mind, taunting Tina as she keeps running away. Then, as Tina becomes a prisoner of her own mind, which in reality is an extension of the societal pressures she faces, their confrontations become physical.

Dramatic music with shaking bass and elongated sounds of sitar and sarod strings seem to fill the screen and Tina’s mind, causing a juxtaposition in what should be peaceful music, yet clouds Tina’s mind with hallucinations. Bahl puts abrupt stops to the music to fill the film with sounds of ambient noise. There is never a moment of peace in the sound, it is either intense music or the creepiness of total lack of music in tense situations.

The essence of the film captures the tradition of classical Indian dance and how Indian women are so pressured into letting this heritage go or hiding it for the sake of western modernity. Indian dance is essential to the formation of the film and the isolation experienced by Tina is just as important. The suspense rendered by this film creates a metaphor for the battles experienced by modern Indian-American women. Bahl has created an exemplary work that sparks a dialogue about the Indian-American female experience in both a thrilling screen story and beautiful performing arts production.