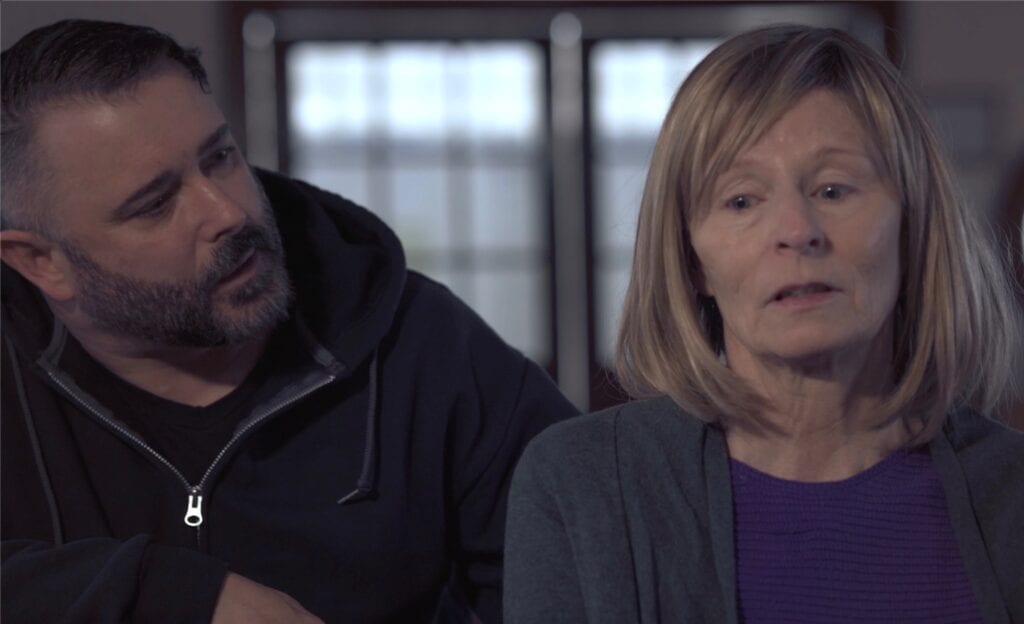 It’s no secret that life is filled with challenges, heartbreak, and internal warfare, but these hardships often become a set of blessings in disguise. Debbie Sutcliffe’s Pushing Envelopes dives into these beautifully complicated measures of existence, and with the use of character, tone, and visual style, viewers of this 20-minute film are immersed in states of self-reflection and moral contemplation that simultaneously provoke and inspire the mind, body, and soul.

The film begins with a heightened sense of urgency and suspense. Opening on a steady dolly shot toward the back of Alice Ellie (Debbie Sutcliffe), viewers are presented with an element of unknowing: Alice is revealed in fragments, defined only by detailed close-ups of her sullen expression and the movements of her hands as she counts hundred dollar bills at her kitchen table. A loud drumming soundtrack grows in volume and intensity as she moves each dollar bill from one hand to the other. The beat of her counting is matched by the continuous action of Ray Richards (Mickey Stone), as he walks down a dimly lit neighborhood street. His hood is up, and his pace is steady. As cuts between Ray and Alice match in rhythm and style, it becomes clear that these two characters are linked and intertwined in some way…But how? As Ray approaches the door of Alice’s home, she opens it willingly, but maintains her solemn expression. She hands the money over to Ray, and the soft lighting and harsh shadows amplify the emotions each character exudes: fear, uncertainty, and lament.

Cool colors of blue and green wash across the screen as Ray begins to transport Alice’s money throughout the neighborhood. With his purpose still unclear, his silence remains unbroken as he visits various characters across the city: a young and single pregnant woman, a couple dealing with the financial strain of medical bills, and a woman struggling to pay rent. Each character is at a breaking point, and their heartache and desperation are familiar to us all. The concerns of financial burden and solitude always seem to go hand-in-hand, and the execution of these emotions and grief from the cast strike a chord—allowing us to place ourselves within their narrative positions.

At this point in the film, we as viewers are still searching to understand the motive behind Alice and Ray’s work. Hints of mystery and suspense continue to build with their limited dialogue and undefined mission. With the constant movement of dolly and tracking shots, we are guided through the narrative, both physically and emotionally. Their obscure motives are slowly understood as small clues are pieced together through fragmented close ups. We search their eyes, each filled with a longing and desire, and realize that their emotions and expressions speak louder than words: their pain becomes ours, and as their mission unfolds, they are seen in a new light. The physical darkness of the initial shot is eventually realized as a metaphorical statement, relating to the dark circumstance Alice is in. Her interactions with Ray aren’t seen as coerced or filled with malintent; in fact, they’re quite the opposite.

As Ray finishes moving from door to door, he and Alice meet once again—only this time, they settle in the pews of a church. Alice never looks at Ray, her eyes staring beyond the camera. When Ray takes a seat behind her, he stays close and listens closer: Alice pours her heart out to Ray, revealing the pain, misery, and confusion that she has been feeling—physically, spiritually, emotionally. It’s in this moment that we truly understand the motive behind Alice and Ray’s actions: to turn suffering into understanding, change, and inevitably, inspiration.

Alice and Ray begin to converse about the ways in which their faith has struggled amidst adversity, their words providing a sense of knowing and enlightenment. A light of hope begins to shine as they share their vulnerable truths: they work to turn their hardships into blessings, and as they do, we are able to reflect upon our own circumstances, and how the choices we make with our words and actions can ultimately determine our fate and legacy.

Pushing Envelopes goes beyond an entertaining narrative—it offers its viewers a chance to carry its message beyond the screen: to empathize with others by offering support and love without any preconceived notions. The narrative of this film is supported by the energy and reception of the cast, along with its inspirational and fitting music. The film is more than just a story: it’s a message and a call to action. This film offers viewers a chance to understand and reflect upon their own relationships and interactions, and provides a sense of inspirational resilience that can be achieved with the right heart and soul.

You can learn more about Pushing Envelopes on the film’s Facebook page and watch the trailer on YouTube. To see what else Debbie Sutcliffe has done, take a look at her website, Twitter, Instagram, and IMDb. Connect with Olivia on her profile.