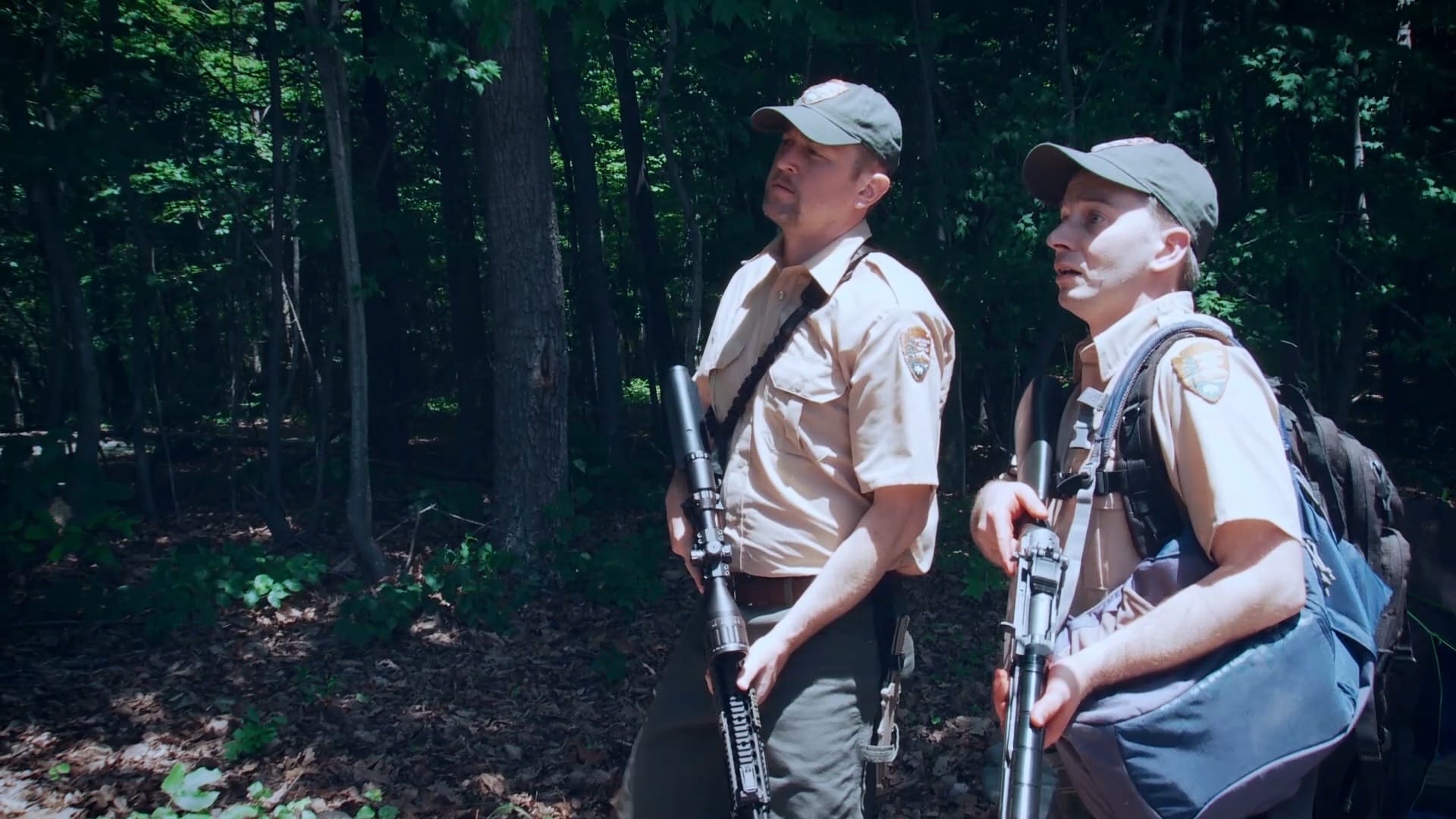 The kickstarter campaign that fueled A Hunter’s Weekend describes it as a horror/comedy mockumentary and begs the question: what would happen if Christopher Guest met a slasher movie? Writer/Director Amy Taylor’s feature debut follows park rangers, Lyle (Benjamin Guenther) and Victor (Christopher John Young), as they hold their annual Hunter’s Weekend Competition. But there’s a twist — this hunting weekend is for serial killers only.

As one would expect when running an invitation-only event for these types of people, one hunter refuses to play by the rules, and bodies stack up as someone starts killing the other hunters instead of the innocent park guests. Lyle and Victor are forced to solve the mystery and catch the killer before more of their comrades are killed.

Actors Guenther and Young are the core of the film, and their comedic talents are the ammunition that makes this film the enjoyable gunblast that it is. Lyle, the trigger-happy, cocky, alpha male, and Victor, his little puppy dog companion, are in no way sympathetic characters, but their heedless attitudes and super-charged (yet unearned) bravado make them more than compelling and fun enough to want to spend the just over one hour runtime with.

Working with a micro budget of $10,000 raised through crowdfunding, writer and director Amy Taylor deftly chose to shoot Hunter’s Weekend as a mockumentary, with characters speaking in interviews to the camera. The aesthetic works. It adds to Lyle’s arrogance that he would want his event broadcast with him as the star. It is also used to hide some technical issues, and allows for a lack of necessary props. With such a small budget some things will need to be forfeited, and in this case, the audio design was the chosen casualty. Audio levels and sound design were uneven throughout the film, however, that was skillfully hidden and excused by using the mockumentary style of filmmaking. Even with this small budget, the cinematography (by Josh Young) is strong — with striking tracking shots of hunters through the forest and some aesthetically beautiful tent and lake shots. Not only that, the genre gives a platform for the outstandingly clever script to shine.

The plotline joke builds up during the first interview with Lyle. After wading through his arrogance and inflated manliness, the dialogue allows us enough clues to ascertain that this is not a normal hunter’s weekend, without spelling it out for us. Young and Guenther are craftsmen of comedy, and they play their characters with nuance. One of the funnier underlying jokes is the bipartisan attitudes among the serial killers of stranglers vs. shooters/stabbers, with Lyle and Guenther taking slight jabs at those who use their hands to murder. Instead of just treating the characters one-dimensionally, Young’s script gives Victor an endearing character arc. Like other films of this genre, however, the funniest moments are the anti-jokes, found in the contrast of the character’s macabre killer monologues as they sit among a naturally stunning environment.

The trophy kill of Hunters’ Weekend is Taylor’s use of the film to expose the crass vulgarity of toxic masculinity. Toxic masculinity is a narrow and repressive description of manhood, designating manhood as defined by violence, sex, status, and aggression. The code of toxic masculinity requires that men are dominant over everyone else, have no needs, show no emotion, and are always #winning. Taylor explores the male notions of greatness in the typically male-dominated field of murder. The relationship of Lyle and Victor epitomizes the need for males to dominate — with Lyle bullying Victor into forced loyalty, as well as Victor’s awe of Lyle’s womanizing skills. Toxic masculinity is a hot topic that Taylor’s skinned and quartered in her filmmaking by using a crew made up of 60% women.

Hunter’s Weekend is a mockumentary with a message and a well-deserved third act twist reveal. It examines how toxic masculinity hurts men and women, all the while letting us laugh as we go along with Taylor as she joyfully romps through those tangled misogynistic woods.