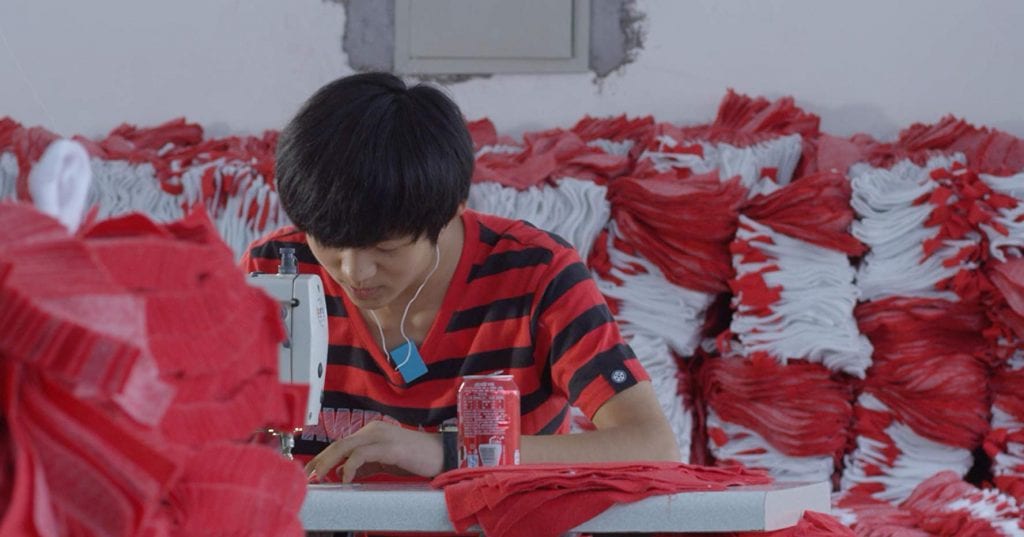 Before Christmas is a short film that takes place in “the big city” in China and focuses on teenager Xiao Lee who, along with his father, works in a factory making Santa hats. The hours are long, the work is repetitive, and the boss is mean. We watch as Xiao goes into work day after day, sits down at his station and sews for hours. Xiao is unhappy with his situation, and dreams of making music. He is constantly singing along to his iPod, and we learn that a friend of his, someone he admires and looks up to, was once in a band.

The filmmakers worked hard to show the narrative instead of telling it. The audience gets a sense of the family’s position in society from the opening shot. They are standing on the side of a road, each carrying a small bag. Cars pass them, and they continue moving on foot. Later on in the film, we learn that they are moving to the city, walking there with what they have, presumably for work. We understand the familial relationships through small actions and dialogue. When talking to the boss of the factory to get a job, Xiao’s father does all the talking, he even answers questions for Xiao. Later, the mother goes to put a plate of food on the table, and the father yells at her, telling her he did not say she could serve dinner yet. It is subtle moments like these we see the personality of these characters, and we feel like we get to know them in the short amount of time we are given with them.

The colors in this film help to set up the world. Everything is dull, from the clothes they wear to the place they live. Browns and grays are the colors that make their world, everywhere except the factory. The factory, as in the building itself, consists of more shades of gray. The only color that stands out in this film is red, the red of the hats Xiao and his father spend their days making. This red comes to represent both Xiao’s livelihood and prison.

The sound of this film was often jarring. Cuts between clips were harsh – one second we hear the sounds of the city, and the next we hear crickets in the night time. A high-pitched buzzing sound persisted through all of the factory scenes. This put the audience in the shoes of Xiao; it put us into an unsettling situation, like the one Xiao has found himself in. The use of music in the film was unique and worked well. The only music in the film is heard through Xiao’s headphones in the factory, which brilliantly emphasizes how Xiao is yearning for a dream that, in his current situation, seems out of reach. We hear the same upbeat pop-sounding song throughout the film. The line, “Nothing could ever stand between you and the free land,” is repeated. First we hear Xiao sing it to himself, and later we hear it through his headphones.

After work one day, Xiao uses a payphone to call his friend Zhang, the one who was in a band. Xiao asks how the band has been, and Zhang laughs, stating how dumb of an idea that had been. Xiao’s face falls, and we get the sense that Zhang and his band had been Xiao’s dream life, and that the dream was stomped on with just these few words. The film does a fantastic job of giving the audience so much character development and story in these few words and a single expression.

During this phone call, Zhang reveals he now works in a sales department, doing exports of Christmas decorations.

“What is Christmas?” Xiao responds.

These three words made me jolt forward in my chair. They revealed the entire point of the film to me. I’ve lived in the U.S. my entire life. I knew that factories like this existed in China and other parts of the world, but it never occurred to me that the workers might not know what the products they spent hours making would be used for. When we Americans buy our cheap Christmas decorations and Santa hats, we often forget where they are coming from. We forget that, for us to have cheap, imported products, somewhere else someone must suffer an exploitative working environment. This film is the story of the commercialization of a holiday that is supposed to be about giving and family that has warped our global society, told through Xiao’s experience. Before Christmas is a captivating film that tells the story of how consumerism affects the lives of those around the world, and audiences will walk away from it having seen these effects from an often overlooked perspective.

Review by Denah A. Johnston Developmental Editing by Alexandra Hidalgo Copy Editing, and Posting by Denah A.…

Review of Sharon Wilharm’s Summer of ’67