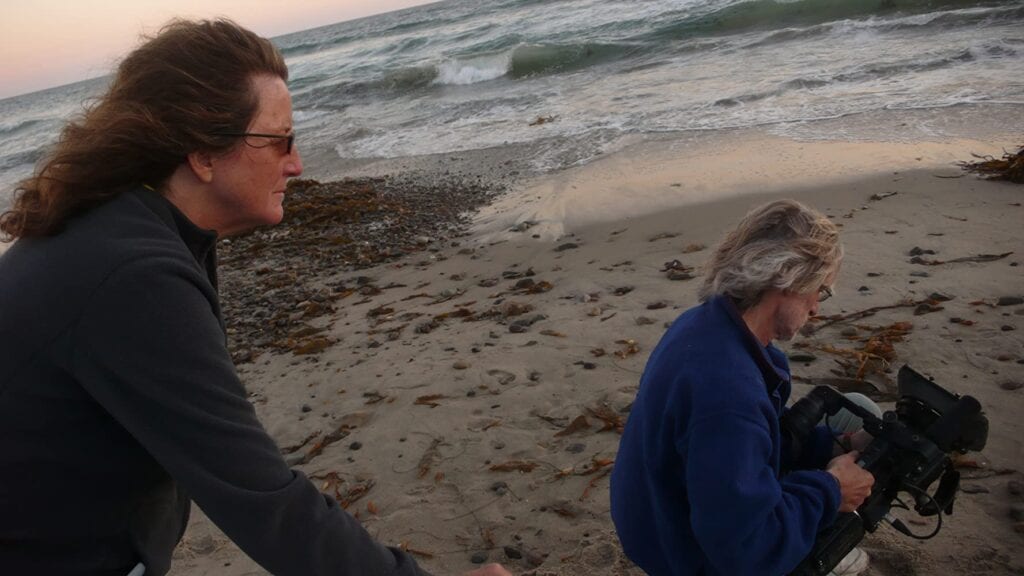 Chelo Alvarez-Stehle (left) during the filming of Sands of Silence: Waves of Courage

Sands of Silence: Waves of Courage, a documentary produced, directed, and written by Chelo Alvarez-Stehle, will be streaming for free online until October 26th. This groundbreaking documentary unfolds over the course of 15 years, as Alvarez-Stehle investigates sexual exploitation and trafficking around the world. She interviews women from Asia and North America, and parallels their survivor stories with her own family’s experiences with sexual abuse.

The film thoughtfully and emotionally chronicles the suffering and healing of survivors in their own words, and encourages its viewers to break their own silences. In a recent Ms. Magazine article, Alvarez-Stehle said, “After screening the film to thousands in Europe and the Americas, we now know that the film encourages people to confront and report their perpetrators, and that it also inspires perpetrators currently serving time to reflect on their crimes, assume responsibility for their actions, and work to repair them.” The film’s ability to get perpetrators to think through the repercussions of their actions is particularly vital as we try to find ways to prevent sexual abuse, not only by having potential victims protect themselves and each other but by avoiding the abuse in the first place.

Alvarez-Stehle was additionally featured in a Beyond the Lens interview where she candidly speaks about her own traumas and the way the filmmaking process forced her to confront her silences and heal from the past. She described the project as being “kind of a Pandora’s box opening. One person breaking the silence inspired the other person. And that happened in my house, in my family. It happened with my sister, then she inspired me to break my own silence.”

In her agnès films review, Julie Casper Roth wrote that the film “demonstrates that trauma is not merely the plight of women in far-off lands. It can exist close to home and can only be felled by transparency and communication. The narratives contained within the documentary make this film a helpful resource for individuals and groups tackling the issues of abuse and sex-trafficking.” With it being available online, this is the time to soak in the wisdom, hope, and revolutionary power of this documentary.

Sands of Silence: Waves of Courage remains as relevant and emotionally powerful as ever. It will be streaming for another week on worldchannel.org as a part of their Hispanic Heritage collection.

The English Department at Ohio University seeks an assistant professor for a one-year term. Faculty…

America Heard is looking for filmmakers