Interview with Noor Gharzeddine, director of Are You Glad I’m Here

What was the inspiration for Are You Glad I’m Here?

I was intrigued by the idea of having a younger American woman visit Lebanon and befriend someone who she never normally would have met. I’ve been traveling from the US to Lebanon to visit my family since before I could walk, so the core of the premise was an experience I felt close to. By having characters from both countries I felt I could explore these two sides of myself, along with the inherent clashes that arise.

My senior thesis film at Bard College also explored the theme of unlikely friendship. The film was about two women from different generations who are forced to spend time together after getting double booked at a lake house. I’ve been inspired by this type of friendship for a while, and making it multicultural really just heightened the whole idea.

I was also inspired by a sort of revenge fantasy, where one woman defends another from an antagonistic male character, and in doing so the women are isolated from society but bonded to one another. I think this idea came to me one day when I was being cat called on the street, and I wondered what I would do if I was an observer of the situation. I’m now seeing how closely that resembles the plot of Thelma and Louise! Which I only saw recently but I’m commonly told that Are You Glad evokes it.

You collaborated with your romantic partner, Samuel Cyrenius Anderson, on the writing of the project. The film explores the relationship between two women who seem to start off fascinated by one another (each exploring the space of the other) and end up genuinely caring for each other. It also has a distinct narrative that drives the film. How did the two of you develop the narrative?

I came to Sam with a rough idea of the plot (just a few sentences) and he ran with it. There were a couple months where I was working another job, and he was just working on the first draft of the script. Once we had something to work off we spent almost a year going back and forth with revisions.

We knew we wanted to establish the relationship you outlined in your question, and we knew what our climactic midpoint would be.The rest of the conflict naturally developed because of fundamental differences between our two protagonists. The differences in age, culture, and life experience meant that there would always be some level of conflict, disagreement or misunderstanding no matter what situation we put them in. Whenever we’d tackle a scene we’d allow these differences to play out, and that’s how a lot of the interpersonal conflicts naturally developed.

What were the challenges and benefits of working on the piece together?

Having a teammate immediately makes a project feel real, and I don’t think the film would have happened had we not started the process together. I definitely thrive in a collaborative environment and I think working together gave me the energy to keep pushing everything forward, despite the challenges. It also allowed us to multitask; as Sam was writing new drafts of the script I could be talking to producers in Lebanon, applying to grants, or putting together visual treatments, etc. I think the main challenge we faced was learning how to talk to one another in a “professional” way. When you’re working with a colleague you present all critics through a sort of professional filter, which you forget about when talking to your significant other!

In the publicity I’ve read for the film, Kirsten, the American millennial teaching in Lebanon in order to expand her horizons, is framed as the central character. When I was watching I couldn’t help but be drawn to Nadine, the Lebanese mother who befriends Kirsten — and of course the film is so much about the relationship between the two of them. How did you go about developing the characters and that relationship?

You’re right that Kirsten is sort of our guide into the film, but as time goes on we realize that we’re growing increasingly involved in Nadine’s life, just as Kirsten is. The film’s structure forces us to define each woman through what we see in their shared relationship.

A still from Are You Glad I’m Here

The audience doesn’t get to spend much alone time with either woman, and we don’t know what they’re like in their regular social circles. This creates a curiosity in the audience that the women also share for one another. Language is another tool we use to create this feeling of curiosity both in the women and in the audience.

An American audience will feel included during the first half of the film, where everyone is speaking English to accommodate Kirsten. However, once we’re introduced to Nadine’s family the dialogue switches over to Arabic, and like Kirsten, the viewer might feel a bit more isolated or left out.

We wanted to create characters that challenged each other’s views of the world. As an audience member I want you to see how nuanced each situation is and constantly go back and forth with who you think is in the “right.” To me it’s the challenges in their relationship that really forms the plot.

The score for the film perfectly highlights moments and never overpowers. How did you find and collaborate with your composer?

I did my postproduction at ProMedia in NYC and they had an in-house composer, whom I immediately got along with. I had met with other composers before deciding to move forward with Simon Taufique, and I think that the whole process was very educational. Communicating about music requires certain terminology; even if you abstractly know what you want to hear you have to find the right words to portray that. Speaking to a variety of composers allowed me to get into the habit of talking about music like a musician. Simon is very experienced (and patient) and was able to guide me through the process. It was also great to do both my score and sound mix at the same place because the two things really inform each other. Simon and I could finalize a piece of music and then immediately work with the mixer, Brian Langman, to see how the piece could be woven into the film.

Once I started working with Simon I had a better sense of what I did and didn’t want, and he had a wealth of knowledge that really excited me. Simon created a temp score for the entire film, and then we went through it and decided what we liked and how he would adapt those ideas into an original score. It was honestly a fascinating and joyful process for me. 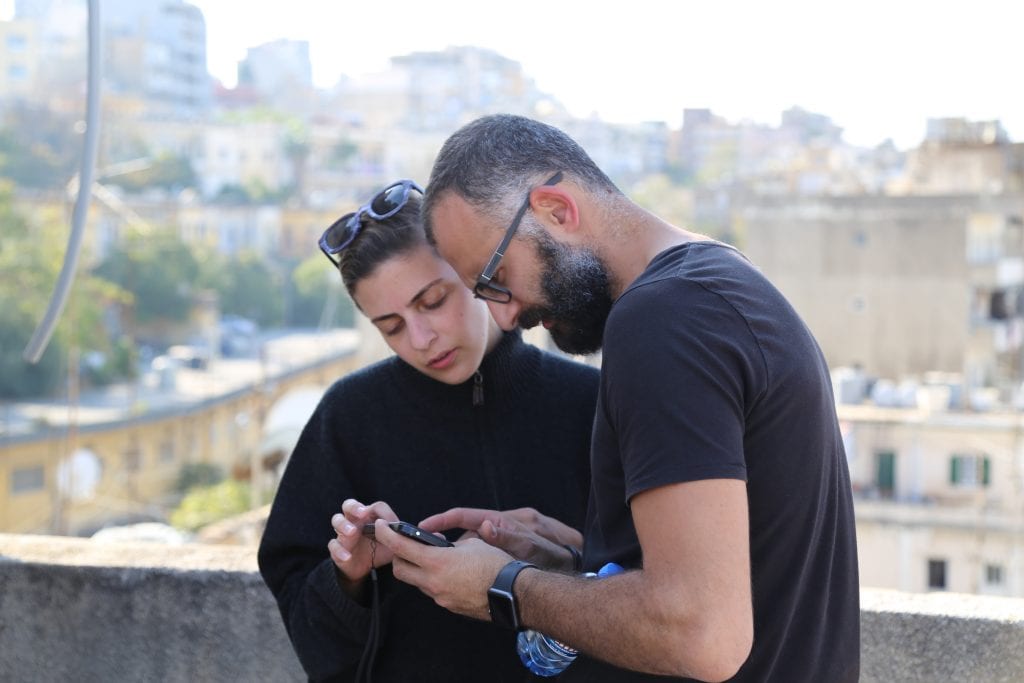 Director Noor and DP Ziad on set in Lebanon

The story plays with time and perception by starting with a scene in a point in time that you come back to towards the end of the film. I couldn’t help but think of the old adage — “when producing a film there are three versions – the film you write, the film you shoot, and then the film you edit” — at what point did you make the decision to play with the timeline in that way?

Although that decision looks like something that might have happened in the edit it was actually a part of the script. For the first half of the film we’re building towards this climax, but it’s very subtle and unexpected. I liked teasing the ending at the start so that the audience is aware/remembers that we are, in fact, building to something. I think it helps create a more active and involved viewer, and a sense of satisfaction once the film catches up to itself.

How much of the film was informed by your shooting in Lebanon? I understand that you wrote the script in New York City and, of course, have cultural ties to both America and Lebanon, but how much of the script evolved during the shooting process?

Sam came to Lebanon with me, so we really were editing the script nonstop. We made changes once we arrived in Lebanon, once we had our crew, once we started auditions, etc. Tess Elliot Harrison and Marwa Khalil (who play Kirsten and Nadine) had around a month of rehearsals with me, where they’d come to my house and we’d edit dialogue and figure out blocking. A lot of the dialogue evolved based on their interactions in these rehearsals.

I think having that time was very important because we’d had our basic idea for so long, and then just got this whole new wave of inspiration from the process itself. We were in Lebanon for over five months and shot for the last three weeks, so we had time to immerse ourselves in the story while on location. Sam was also on set, so he could be talking to actors about their characters while I was shooting.

What advice can you provide to other filmmakers wanting to make films that involve traveling to other countries; and do you have plans to shoot future films in Lebanon? What’s next for you?

If you want to shoot abroad it’s important to connect with the specific community you want to work with. I tracked down the production company that had produced some of my favorite Lebanese films and started asking them for contacts and recommendations. Through connections, word of mouth and cold emailing I learned more about filming in Lebanon and got in touch with the right people.

A still From Are You Glad I’m Here

The first thing you’ll need is a line producer, who will basically be your “fixer” when shooting in a foreign country. You have to trust their taste, because they’ll then connect you with the rest of your crew. Same with your casting director. I had multiple sources recommend the same casting director, and once I met with her I knew she’d introduce me to the right talent. It should be relatively easy to connect with cast and crew once you’ve found the right line producer and casting director. I’d also recommend just spending time in the country or community you want to shoot in, and talk to filmmakers who’ve shot there.

Lebanon is a small country, so most of my cast and crew had worked together before, and this helped me create a sense of community on set despite my being new on the scene.

Although I don’t have any immediate projects set to shoot in Lebanon I 100% want to in the future! And I have a few ideas brewing. I was inspired by so many of the actors who we worked with and who auditioned; I want to write something that features all of them.

I’m currently working on a short video series that’s a collaboration with actors and writers called The Human Monologue Project. Additionally, I’ve been directing and producing music videos. My most recent two were Magic by Linda Diaz and Boomerang by Nadia Vaeh. I’m also developing two features and I just moved to LA.