Please Watch Crazy Ex-Girlfriend with Me

Anyone who knows me knows what my favorite show is because I simply do not shut up about Crazy Ex-Girlfriend. Ever since I finished watching it the second time, I have been on a quest to find someone to watch it with me again. So here is my cry for help/argumentative essay to anyone who needs something new to binge-watch.

Crazy Ex-Girlfriend is a comedy/drama TV show created by Rachel Bloom and Aline Brosh McKenna that follows Rebecca Bunch (Rachel Bloom), a deeply unhappy lawyer from New York City who runs into her ex-boyfriend, Josh Chan (Vincent Rodriguez III), from summer camp and decides to drop everything and move to his hometown of West Covina, California to get him back. However, when she gets there, she learns that Josh has a girlfriend, Valencia Perez (Gabrielle Ruiz). Rebecca then meets Paula Proctor (Donna Lynne Champlin), a paralegal at her new law firm who vows to help Rebecca get Josh back. 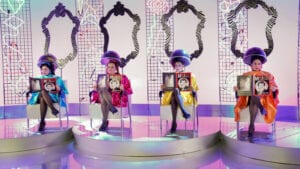 And the best part of the show? It’s a musical! Every episode has three to four original songs all of which serve the plot and character’s development. It is obvious through the songs that the writers of this show took the time to really understand their characters, their struggles, and their motivations. For example, in the number “Settle For Me,” Greg (Santino Fontana), a friend of Josh who has a crush on Rebecca, asks her out, while knowing she is trying to win back Josh. “Settle For Me” has clear ties to Ginger Rogers and Fred Astaire, with music, choreography, and costuming all inspired by the pair. The lyrics of this piece help us to understand Greg better as a character. While he likes Rebecca, and even thinks they would make a good couple, he cannot get past his own self-loathing as he compares himself to Josh. He sings, “Yes, Josh is a dream, but I’m right here, in flesh and blood, and self-hate. Settle for me. In a sad way, darling, it’s fate.”

One of the main themes of the show surrounds mental health. When Rebecca arrives in West Covina, one of the first things we see her do is dump all her medication down the sink. She believes that, because she escaped a job and a city that made her unhappy, she will not need her antidepressants anymore. She will get back together with Josh, and she will never have problems again. However, Josh is not interested in her, as he is dating Valencia, and, even if he was, a boyfriend is not a solution. During a  poorly-attended housewarming party Rebecca throws, we get a musical number called “A Boy Band Made Up of Four Joshes,” where an imaginary boy band made up of four Joshes promises that they will fix everything, singing, “all your psychological problems, girl we’re gonna solve them.” The imaginary boy band is dressed in all white, like the Backstreet Boys in the “I Want it that Way” music video, and Vincent Rodriguez III, who plays Josh Chan, is able to show off his best boy band moves with choreography by Kathryn Burns.

While four Joshes all interested in dating Rebecca might have been able to “fix her psychological problems” in her fantasy world, the one Josh who is taken certainly isn’t going to fix everything. Rebecca, realizing she might have made a mistake throwing away all her medication, gets a therapist. Throughout the first and second seasons, it is clear that Rebecca does not actually want to be in therapy. She wants a quick fix to her issues without having to put in the work. An event early on in season three makes her realize that she does need therapy. She also requires medication and people in her life who truly care about her and her needs. She ends up seeing a different therapist, who has a new diagnosis for her that isn’t just generalized anxiety and depression. Rebecca is ecstatic to receive a new diagnosis, which she sings about in “A Diagnosis.” She thinks her diagnosis will help her find a quick fix to all of her problems, sings “No more bad pills, fads, or tricks. Who says there isn’t an easy fix?” as she walks down the hall of the hospital. The choreography of this number is kept simple, giving the lyrics and emotions of the song the chance to shine. 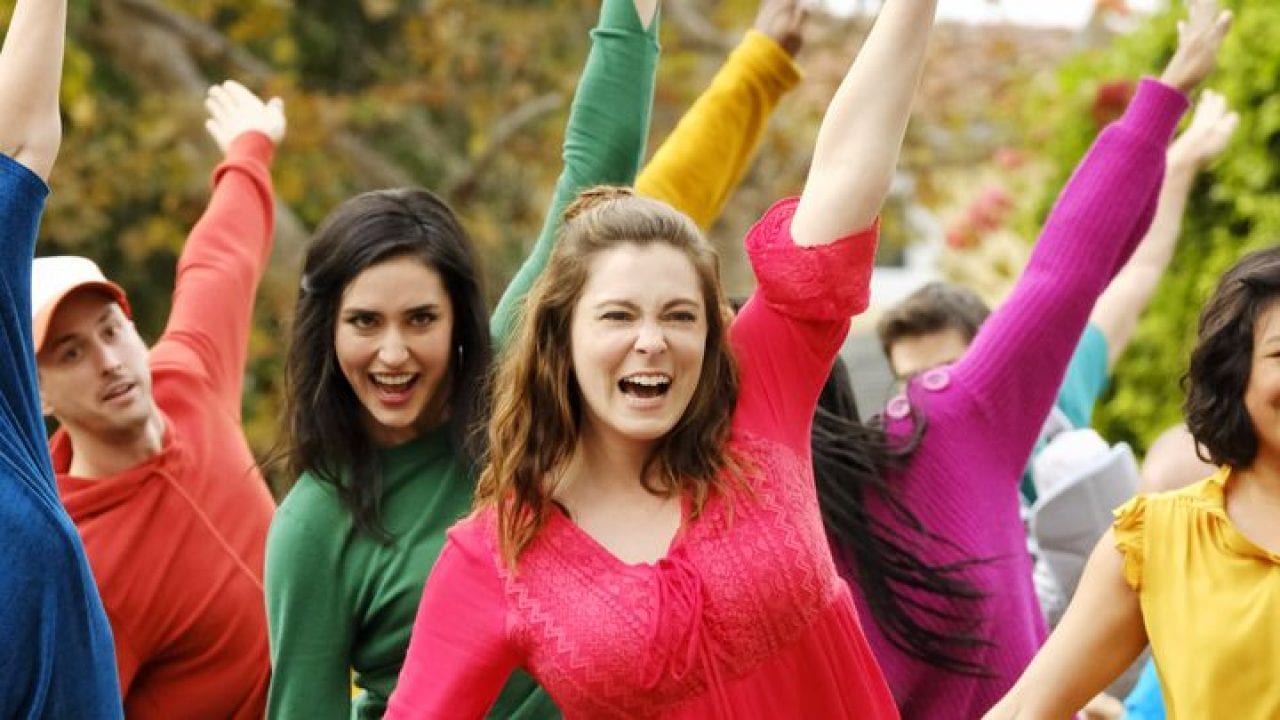 Rebecca Bunch (Rachel Bloom) tap dancing during “Anti-Depressants Are So Not A Big Deal.”

When she is diagnosed with Borderline Personality Disorder (BPD), she rejects it, demanding a second opinion. This show is one of the few I have seen that treats mental illness with respect and understanding. Rebecca is not broken because of her BPD, nor is she any less of a person for it. Her diagnosis strengthens her, helping her to understand her own feelings and learn from her past mistakes. If you want to read more about how the show handles BPD, I highly recommend the piece written by Bailey Disler, a fan of the show with BPD.

Another song in the show that actually helped me personally is “Anti-Depressants Are So Not A Big Deal.” Rebecca is reluctant to go back on medication, because they made her feel like a zombie in the past. Her therapist has a new medication she wants Rebecca to try, and Rebecca refuses at first. Her therapist sings her this song, complete with La La Land inspired choreography, explaining that plenty of people are on antidepressants for a variety of reasons and that it is nothing to be ashamed about. As someone on antidepressants, this song means the world to me. I feel like there is so much stigma around medication and mental illness that it is so refreshing to be told that it’s really not that big of a deal from a television show like this. It’s one thing to discuss antidepressants with a therapist or with friends, it’s another to see it normalized in a popular show in a giant, Emmy-award-winning musical number. Tons of people deal with these issues, and use antidepressants to help them cope. To quote the song, “why should I feel crappy about something that makes me happy?”

Additionally, the show also has fantastic LGBTQ+ representation. While the main romance (at least in the first season) is a “love triangle” between Rebecca, Josh, and Greg, the show explores LGBTQ+ characters through Rebecca’s friends. Most noticeably, Rebecca’s boss, Darryl Whitefeather (Pete Gardner), discovers that he is bisexual through his friendship with the openly gay White Josh (David Hull) (he’s called White Josh throughout the show because he looks like a white Josh Chan and is also named Josh). Often in shows and films, if there is an LGBTQ+ character, they are depicted as discovering their sexuality in their teens or twenties. Darryl, however, is in his forties, divorced, and has a kid. He is elated to realize that he’s bi, and decides to come out to all his friends at the office immediately. He sings one of the show’s most popular songs, “Gettin’ Bi,” as he explains what bisexuality is and why being bi is great, all while dancing in front of a giant bi pride flag. This prompts Maya (Esther Povitsky), the new intern, to also come out as bisexual. Later in the show, Valencia also reveals that she is bi. I don’t think there is another show out there that has bisexual representation like this. The exploration of sexuality in this show is done in such a loving and caring way. They show that no matter your age or background, it is never too late to come out and live as your authentic self. 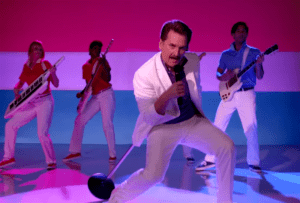 Another place this show excels is in showing strong, female friendships. At the beginning of the show, Rebecca has a hard time connecting with the women around her, as she is so focused on Josh. She forms a close friendship with Paula through her pursuit of Josh, but their friendship goes beyond this. Rebecca and Paula are there for one another through Paula going back to school, Rebecca’s struggles with mental health, and through both of their career changes. Rebecca also forms close bonds with Valencia, who is dating Josh at the beginning of the show, and Heather, her next door neighbor. Rebecca, Paula, Valencia, and Heather refer to their friend group with #gurlgroup4evah. These four women bond over many things, but the most notable moment they show their connection is in the song “Let’s Generalize About Men.” This song comes after Josh breaks both Valencia and Rebecca’s hearts. The four women decide that all men are bad and evil like they are currently perceiving Josh, singing “Let’s take one bad thing about one man, and then apply it to all of them.” The song is eighties inspired, with the women all dressed in bright colors and big hair. It’s all tongue-and-cheek, playing with the idea that sometimes we need to generalize and vent in order to move forward with healing.

Anyone who has ever heard me talk about this show knows that I could keep going on forever. This show has held a special place in my heart ever since I watched the first episode and heard the first song. The premise is so out there that I was instantly drawn in, and I love a good musical. The second episode made me laugh so hard my roommate actually asked me if I was okay. If you are looking for a new show to watch, I cannot recommend Crazy Ex-Girlfriend enough. It’s a show that will have you singing along from the very first number, “My life’s about to change—oh my gosh! ‘Cause I’m hopelessly, desperately in love with…” Crazy Ex-Girlfriend!

You can watch Crazy Ex-Girlfriend on Netflix. Connect with Kara on her profile.