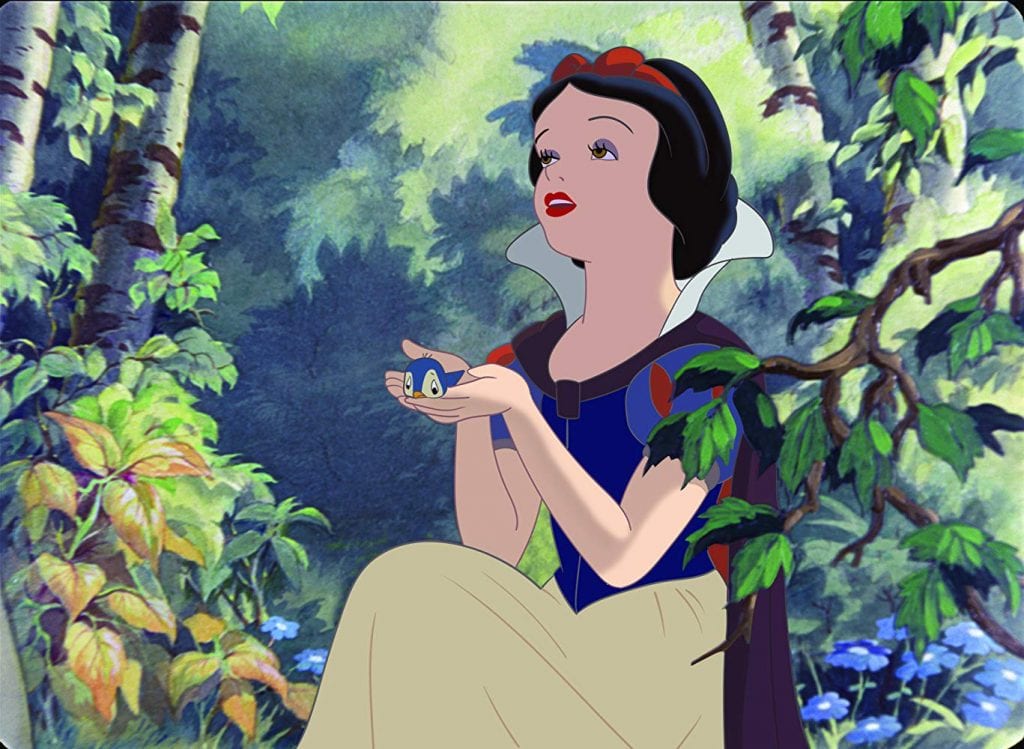 Snow White was the first Disney Princess and everything a young woman was expected to be in 1937: Nurturing, innocent, and beautiful (despite only being 14 in the film)

Even over the incessant chirping of songbirds and chorus of woodland creatures, the battle cry for gender equality in children’s film has finally been heard by the main villain in this war — Walt Disney Studios. Disney, in partnership with Geena Davis’ Institute on Gender in Media, has agreed to evaluate their films’ scripts for gender bias using an AI technology called GD-IQ: Spellcheck.

Developed at the University of Southern California Viterbi School of Engineering, the technology analyzes the text of a script to determine its number of male and female characters, assess the number of speaking lines the various groups have, and the level of sophistication of the vocabulary they use.  The technology can also identify the number of characters who are people of color, queer, possess disabilities or belong to other groups typically underrepresented in storytelling[1].

Although the majority of Americans now see gender as a spectrum, rather than a man/woman binary, for the sake of this article, I will label the stereotypes as primarily male and female, correlating with the simplistic storylines, character development, and plot of the Disney scripts.

The first of these films, Snow White and the Seven Dwarfs, was created in 1937 and the most recent, Moana, was released in 2016.  Although nearly seven decades apart in production, for the poor unfortunate souls that are Disney Princesses, the writers of these films haven’t improved their situation much.  Most of the films, with a few exceptions, share an analogous plotline wherein the female protagonist, using mainly her beauty, must make a man fall in love with her so that he may save her, take care of her, and they can live happily ever after.

Who could forget Merida’s iconic (and uncharacteristic by Disney standards) choice to join the contest to win her own hand in marriage.

Disney has made major advances in the last few years with their latest films. Princesses in Frozen, Moana, and Brave have been able to use their strength, independence, and intellect to achieve their goals of leadership, proving they don’t need a man, and are more than eyelash-batting girls waiting for a prince to save them. But most Disney Princesses are domestic, nurturing caretakers defined solely by their submissiveness and their looks, with no outward personal goals and whose purpose is to find a man that will love them, thus making them feel worthy.

Snow White’s entire plotline is so poisoned by this stereotype it cannot be rescued even by the kiss of a strange man when she’s passed out and unable to give consent.  It’s a stereotype that’s even more cruel to the minds of our young female viewers than the Evil Stepmother that thrives on jealousy, pettiness and the competition women have with each other in their fight for a man’s, uh… heart.

When a romantic relationship with a man or prince is the driving plotpoint of the script, the fair princesses too frequently enter into relationships with extremely unfair power imbalances and some, as in the case of Belle in Beauty and the Beast, are encouraged to begin a relationship with a hairy man that is downright abusive and imprisoning.  It’s Stockholm Syndrome: the Musical. But they do so in order to obtain their main goal — to feel worthy of love.

Just as Ursula steals the tongue of Ariel so the mermaid can chase her male love interest with human legs, all the princesses have a speaking impairment — they aren’t allowed to talk. Disney writers clamp their Princess’ tongues so tightly that they are destined to fail at any attempt to be part of our speaking world.

The most comprehensive research has been done by Carmen Fought and Karen Eisenhauser in 2017’s  A Quantitative Analysis of Directives in Disney Princess Films.  They found that, despite nearly all Disney films proclaiming a female protagonist, the women were outspoken by their male secondary characters in all the films except Tangled and Brave. As recent films have included a larger cast, it has created an even bigger beast of a problem and a greater imbalance in the number of speaking roles for the female characters.  For example, Fought and Eisenhauser found that in the 1989 film The Little Mermaid female characters spoke just 32% of the dialogue; 29% in Beauty and the Beast, 22% in Mulan; less than 42% of the time in Frozen, and the secondary women characters in Aladdin only get 10% of words in [2].  This, despite nearly all of the films claiming a female lead. And, as Aladdin illustrates, Disney does not referee a fair fight when their female secondary characters barely speak and a female lead is outspoken by her male secondaries.

Furthermore, when they counted the number of compliments each female was given in the script, they found the newer films continued to use appraisal words 20% more in order to describe the protagonists’ looks rather than her talent or skill.  The princesses, drawn with impossibly small waists, huge doe-eyes and mile-long eyelashes, are not characteristically accurate portrayals of a female body type. This reinforces to the female viewers that beauty is of greater importance for their well-being and happiness and inadvertently seeds unattainable standards that can lead to low self-esteem issues.

Sexism in film cannot be measured by dialogue alone.  It’s not only about how many times a woman is allowed to open her mouth, or if her words are proactive or submissive, or the amount of time her looks are lauded, it’s also crucial to consider who is a part of their world— who rules that world and who has the power. 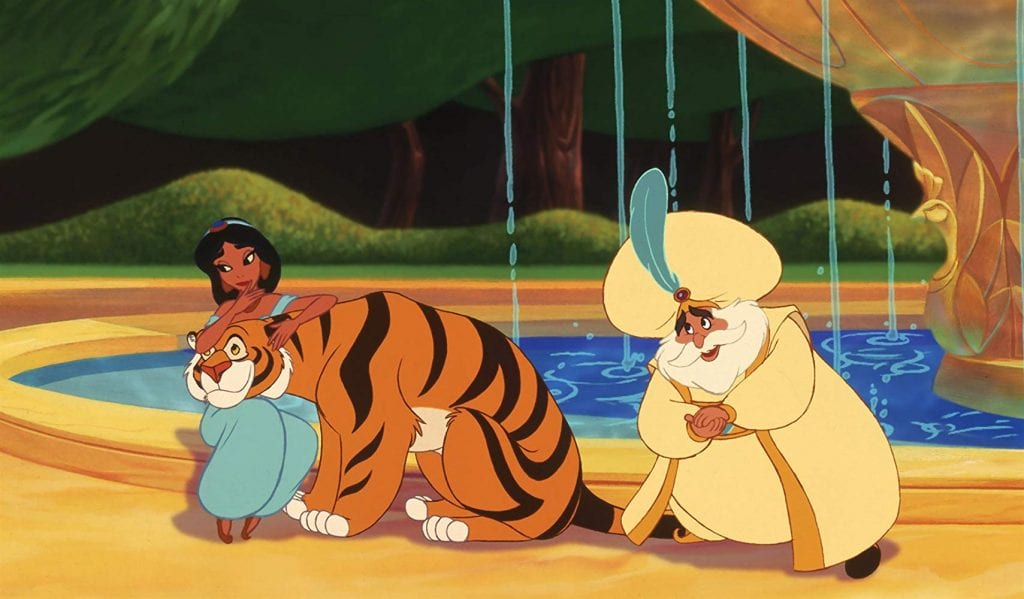 Jasmine just wanted to be treated equally, but her lines of empowerment were drowned out by Aladdin’s own problems.

These films, as they are written today, are feeding their young viewers poisoned apples of passive speech, sexist body images, and seeding a male-dominated worldview into their brains for generations.  By not giving female characters enough lines to quantify their protagonist state, by forcing them to speak in passive voices and words swathed in nurturing, caring overtones, and to make them sing songs about finding a man to love them, Disney implants these ideas with societal value, literally raising our daughters to believe they have to demean and sacrifice parts of themselves in order to be worthy of a man’s love.

The princesses written long ago that little girls admire encourage them to accept vicious faults in men in order to win their love as Belle does with the Beast, and train most of them to have goals that will in no way improve their sense of self. Their goals are mainly to help or be with others — not empower themselves or their vocation. These stereotypes taint the newer-written, more autonomous princesses like Moana, Anna in Frozen, and Merida of Brave, when they are painted with the same Disney brush. The more recent princesses may have a more independent and stronger character arc, yet prance around with the same body type of Snow White. This unrealistic vision of their beauty overrides a lot of what the writers have accomplished. All departments in Disney must get on the same page if they want their important feminist strides in storyline to be taken seriously.  Of course, different body types hurt the bottom line in Disney’s merchandise sales as they cannot slap on a different hair color and re-name the same princess they’ve been plastic-casting since 1932. But I, for one, find it difficult to take feminist rants from a doll-like, skinny, doe-eyed, poor imitation of a woman. It’s important for the independent, warrior words they speak to not be overshadowed.

As careers go, a princess is not even a vocation —  it is a birthright unattainable to most, so the films are subliminally telling their viewers not to strive for a career. Disney, in all fairness, has tried to sidestep this fact by, for instance, rewarding the leadership abilities of Moana and Elsa as they become the leaders of their respective communities.  However, they ignore the history of monarchical practices. Titles like Princess and Queen are only for the most-entitled bloodlines who are born into a wealth of privileged rights and are followed because of who they are related to— despite their abilities to lead or not. Disney rewrites history by pretending a crown is only given to those deserving and strong enough.  And Disney is once again saved by their own use of the cartoon genre that cloaks this brainwashing into a cloud of innocence and nostalgia. When a story is animated it tends to invite dismissals of serious discussion. People tend to brush it off as just a cartoon. That sentiment is powerful, as it allows the studio to disguise the harm it is doing culturally.

Whether the GD-IQ: Spellcheck will be the hero Disney employs to save the damsels from their wordless, helpless, towers of insecurity and weakness remains to be seen.  The next step for the studio, after this announcement, is to actually use the data obtained from it to transform their frog-like male-dominated stories into dashing, progressive works of fiction that depict stronger and more hero-worthy female protagonists that entertain equal partnerships and look like women we know in the real world.

And if this technology is the only and best solution the studio has dreamt of in its seventy years of filmmaking, I am disheartened and my heart is offered to the Evil Queen in a velvet box.  Without a doubt, the studio should be given credit for attempting to change the course of their writing history, and for the (small) strides they have made over seven decades, but one wonders if this is just more Disney magic pulled from the studio hat, as they had the power to cure their misogynistic screenwriting all along. They had seventy years to just hire more female screenwriters.

Brave, the only Disney film that allowed the female characters to speak more than half the film time— at 74%, was created by Brenda Chapman with a goal to specifically smash the Disney Princess Film stereotype[4].  Whatever a screenwriter’s rate these days, I am sure it is a more cost-efficient solution than the latest AI technology to put more pens in the hands of female writers. And if the studio executives really need a computer program to unveil the ugly, glaringly obvious misogyny produced by their mainly male screenwriter pool, then we may be in more danger than we thought.  But for now, Disney studios has styled itself as the knight in shining armor that will save us all from a misogynistic ogre that is its own creation.

To learn more about Denise, visit her profile.

[2] Karen Eisenhauer. “A Quantitative Analysis of Directives in Disney Films” Abstract: A capstone project submitted in partial fulfillment of the requirements for the Degree of Master of Arts English, Concentration in Linguistics, Raleigh. 2017,  2. return

[3] Jeff Guo. “Researchers have found a major problem with ‘The Little Mermaid’ and other Disney movies” The Washington Post. January 25. return

[4] Jeff Guo. “Researchers have found a major problem with ‘The Little Mermaid’ and other Disney movies” The Washington Post. January 25. return