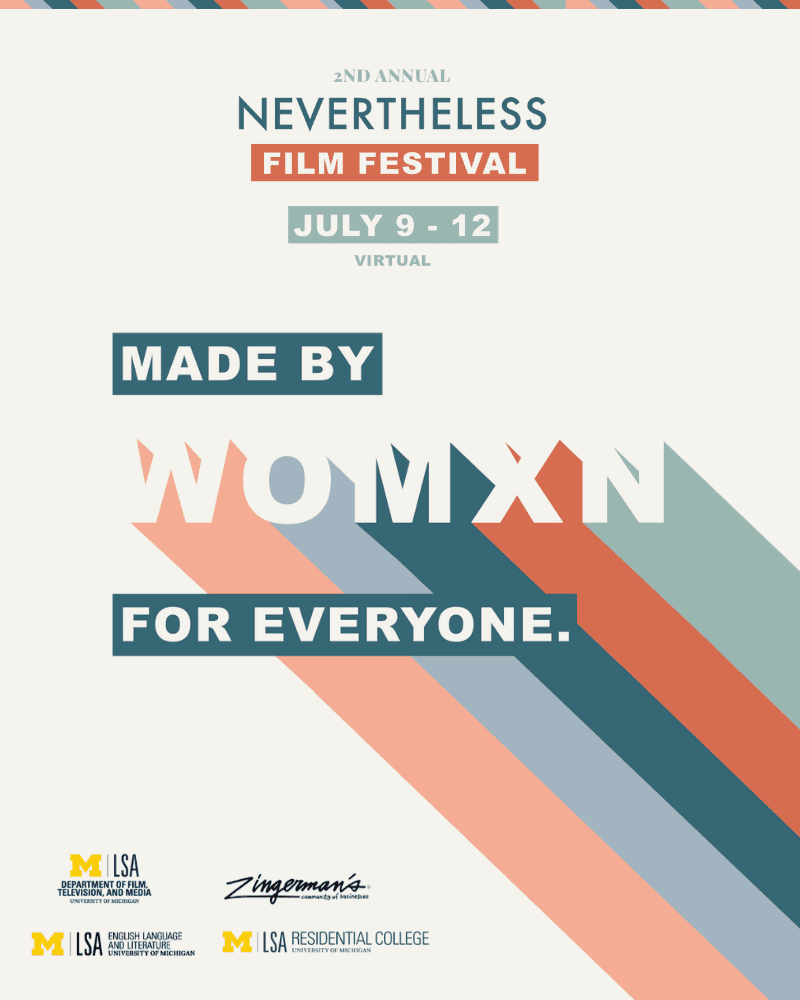 JUNE 10, 2020 — Nevertheless Film Festival is returning for a second edition, from July 9-12. While originally scheduled to take place at the Michigan Theater in Ann Arbor, Michigan, the festival has pivoted to a virtual platform for health and safety reasons. Called “the first of its kind” due to its requirement that all films have at least 50% womxn in leadership roles behind the camera, Nevertheless Film Festival includes six feature films and twenty short films in its 2020 program, with representation from eight different countries. The inaugural festival occurred in July 2019 in Ann Arbor, Michigan.

Now taking place online, the Nevertheless program will be accessible to everyone across the United States. Films will be available to watch anytime between July 9-12, providing a level of flexibility for attendees not normally available at an in-person event. All film screenings will be accompanied by a live Q&A with filmmakers, in which viewers can ask questions via a live chat feature.

“We are thrilled to have the opportunity to pivot to a virtual platform for the 2020 Nevertheless Film Festival and continue forward with our mission of elevating the work of womxn in film even during these uncertain times,” says Meredith Finch, founder and director of the festival. “Our unique program of films is timely, thought-provoking and inspiring. These films are made by womxn, for everyone.”

Many genres are covered in the lineup, including a program called “Late Night Shorts,” which includes four horror-adjacent short films. All four documentary features have themes of social justice, which Finch calls “indicative of the times.”

Among the narrative feature films included in this year’s lineup is Asking For It, written by first-time filmmaker Becky Scott, who was recently named one of seven screenwriters selected for the WGA East & FilmNation New York Screenwriters Workshop.

Documentary features in the program include First Vote, directed by Yi Chen; Personhood, directed by Jo Ardinger; and Hungry to Learn, directed by Geeta Gandbhir and produced by Soledad O’Brien.

The festival is generously supported by:

The following is a breakdown of programming by section:

Asking For It
Directed by Amanda Lundquist and Becky Scott

A put-upon journalist resorts to vigilante justice when the law fails to protect her from an anonymous Internet stalker. Starring Stephanie Hsu (The Marvelous Mrs. Maisel), Irene Morales, and Janeane Garofalo.

Recent immigrants to Canada, a Serbian mother and daughter must find a balance between what they have chosen for the future and what they have left behind. Starring Mirjana Jokovic and Nina Kiri (The Handmaid’s Tale).

Until 1952, federal law prohibited immigrants of Asian descent from becoming U.S. citizens and voting.  Today, Asian Americans are the fastest growing population in the United States. First Vote is a timely story exploring what it means to be American through personal stories of the nation’s fastest growing political constituency’s diverse experience at the polls in battleground states.

This documentary film by Soledad O’Brien and Geeta Gandbhir introduces the faces behind an American crisis — college students so strapped to pay tuition that they don’t have enough money to eat or a place to live.

A lack of food is just a symptom of a bigger problem, the American Dream of a college education slipping out of reach. It is the story of how colleges, once places for children of privilege, opened their doors to students of limited means but failed to provide enough financial aid to allow these new students to graduate without making painful choices. This documentary is not just about the devastating hunger crisis unfolding on American campuses, it is about what can — and should — be done about it.

Personhood tells a different reproductive rights story that ripples far beyond the right to choose and into the lives of every pregnant person in America. Tammy Loertscher’s fetus was given an attorney, while the courts denied Tammy her constitutional rights. In this timely documentary, we see her sent to jail, and then forced to challenge a Wisconsin law that eroded her privacy, her right to due process, and her body sovereignty. Personhood reframes the abortion debate to encompass the growing system of laws that criminalize and police pregnant women. These little-known laws, which now exist in 38 states, disproportionately target lower income women and women of color. At the intersection of the erosion of women’s rights, the war on drugs, and mass incarceration, Tammy’s experience reveals the dangerous consequences that these laws have on America’s mothers and families.

Waging Change weaves together two female-driven movements that reveal an American worker’s struggle hidden in plain sight — the effort to end the federal tipped minimum wage of $2.13 for restaurant servers and bartenders and the #MeToo movement’s efforts to end sexual harassment. The film shines a spotlight on the challenges faced by restaurant workers, 70% of whom are women, trying to feed themselves and their families on tips. Through the personal stories of workers we come to see and experience the everyday challenges these workers face in trying to make ends meet, underscoring the need for One Fair Wage in the 43 states that do not require restaurants to pay their workers minimum wage.

At an abortion helpline, counselors arrive each morning to the nonstop ring of calls from women and teens who are seeking to end a pregnancy but can’t afford to.

In front of all her classmates, Melisa questions the school system and the usefulness of what they are studying by asking a very uncomfortable question.

An existential comedy about the mother of two young children who begins to spontaneously vomit toy blocks.

A lyrical portrait of an unlikely community of U.S. deportees and their loved ones struggling to rebuild their lives in Tijuana, Mexico.

Day One
Directed by Arielle Goldman

A woman prepares for her day whilst on her period.

A band of juveniles embarks on a 24-hour spree of breaking into houses and causing a ruckus.

While trying to maintain composure and a sense of normalcy in a tough situation, Dorris Havemeyer struggles to keep up her spirits while celebrating a significant birthday.

Rare, medium rare, medium, medium well, and well done. Through intimate and personal stories, five women share their experiences in relation to the body, from childhood to old age.

He’s the One
Directed by Jessie Kahnweiler

A girl meets a guy and falls head over heels, but a shocking discovery forces her to question everything. A dark comedy about falling in love with the one person you’re supposed to hate.

A short film about a woman who confines herself to a tiny room, struggling to find meaning in life.

Inspired by a Buddhist ritual to grieve abortions, a Japanese American woman reevaluates what it means to end her own pregnancy.

When a young man makes the long drive home to share his truth with his conservative family, he fears it’s the last time he’ll be welcome.

A young girl wears her afro to school on picture day and must deal with the unexpected consequences.

Power Out
Directed by Lauren Keating

Coming-of-age story meets supernatural thriller, in which Grace loses a toxic girlfriend and gains a true understanding of her family’s past.

A lonely insurance adjuster becomes consumed by his desire to meet his internet girlfriend, who claims to be a princess from a faraway country.

So What If The Goats Die
Directed by Sofia Alaoui

In the Atlas Mountains, the shepherd Abdellah must go to find supplies at a market village for his animals. There, he finds the village abandoned due to a strange event that has wreaked havoc on the lives of all believers.

An agoraphobic woman finds a suspicious, hollow wall in her house.

A film about Arely Vazquez, a Mexican transgender woman and leader of the Saint Death Cult living in Queens, New York.

The Tampon
Directed by Erica Ortiz

Following a night of heavy drinking, an art student comes face to face with the complexities of consent in her college sorority through her art.

Warpaint for the Teenage Soul
Directed by Rebecca Woolf

Two teenage girls form an unlikely bond in a school bathroom when they’re supposed to be in class.

Purchase tickets and passes at http://nevertheless2020.eventive.org

Nevertheless Film Festival elevates the work of womxn in film, inspires audiences of all ages, and engages the community in conversation about the power of equal representation behind the camera. Every film in the program has at least 50% womxn in leadership positions, which includes directors, producers, editors, screenwriters, cinematographers, composers, and more.

The 2011 Los Angeles Women's International Film Festival, which will take place March 25-31 at…

CFE: agnès films member, Marie Ullrich, looking for a short script for her next film