Echoes in Silence is about five women who learn more about themselves and find solidarity with each other through the guidance of Shira, a mysterious woman with supernatural powers. The dialogue in this film had a beautiful lyrical quality almost like poetry. Why did you choose to show your characters speaking this way?

Truth can be poetic. I wanted to capture the different tones and nuances each woman had when they were speaking their truth and thus the best way to capture it is through poetry. Each line of dialogue is a well, a well that turns into a lens in which we get to see them as they are not who we think they are. 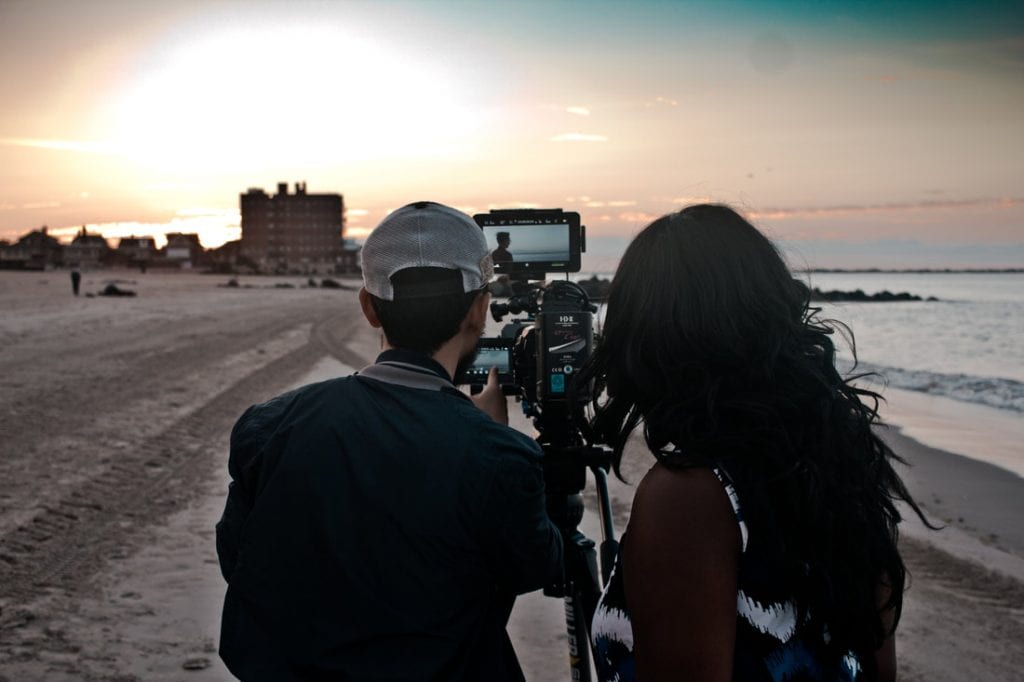 Behind the scenes shot from Echoes in Silence.

Shira calls these women that she leads to their self-discoveries “spirits of the universe.” Are they meant to symbolize different types of women, or perhaps the different qualities inside of every woman?

Both. Within one woman lies a tribe of ancestors, strength, and power that normally outweighs their imagination. Each woman is a spirit. Collectively, they represent the vast essence that women represent.

Your wrote, directed, and acted in this film. What was it like trying to direct scenes you played a character in?

Me acting in it was a last minute decision. I was more interested in writing and directing it. That being said, I purposefully chose the character with the least lines. I was on a similar journey that my character was going through, feeling voiceless and muzzled in the world. It is intentional that when my character speaks her truth; it’s so loud and that’s because she’s held it in and waited to release it for so long. In that respect, directing myself was easy, I went for the truth Melinda felt in the moment instead of projecting what I think it should be or should not be. Directing this film in general has been an utter dream. My cast and crew are just phenomenal. They made each day (we ended every single day early) so poignant and effortless. They gave so much to this story and these characters.

Still from Echoes in Silence.

It was so refreshing to see an all-woman cast and gender-balanced crew. Why do you think it’s important to have equal representation in front of and behind the camera?

Stories are only important depending on the lenses we put on them. Having an inclusive cast and crew equates to a universal point of view. I am Multi-Ethnic so I grew up seeing inclusion resound so loudly in some of the smallest and biggest places but rarely used as lens or a platform for vital and yet normally ignored stories to be created on. I wanted to show the world as it exists as well as I’ve mostly seen it be — inclusive. And the film is all better for it.

What would you like viewers to take away from the film?

There is great power in owning your truth. Self-acceptance leads to a community, albeit in this film, a sisterhood. Everything you want is in your grasp. You have all control over your life. And lastly, don’t live in fear, live in your truth.

You’ve said that a lot of your inspiration comes from your international background. How has that influenced your filmmaking style?

My international background comes from being Multi-Ethnic. I’m Guyanese, Dominican, Chinese, Indian, and British. I’ve lived in most of those countries except Guyana. I spent a lot of my childhood in the UK. So my inspiration by nature is international. My favorite filmmakers are from all over the world. I’ve learned from a young age that the world is vast and stories and the lenses in which we put on to tell them matter. Every country from where I’m from is full of culture and traditions and deep history. So they have armed me with a global perspective.

Still from Echoes in Silence.

Do you have any advice for aspiring filmmakers on how to find their own style?

What are you hoping will be the trajectory of Echoes in Silence and what other projects are you working on right now?

It already has had a successful film festival round, 20 acceptances and over 10 awards including Best Director and Best Film awards. I want to lengthen its film festival run for a few more months, then I want to get it into an installation, as well as show the film at women and LGBTQIA organizations.

Interview by Alexandra Hidalgo Copy Edited and Posted by Jessica Gibbons Tell us what Arpa,…

Interview with Danielle Earle, Writer and Director of The Haunted Mind of an Insomniac

Interview with Bat-Sheva Guez, Writer and Director of Behind the Wall