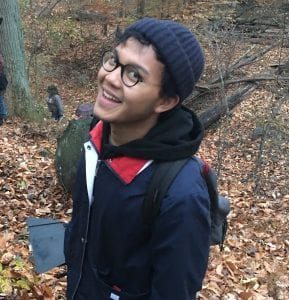 Zoe’s retro-style theme beautifully communicates the timeless story of teenage loneliness, nostalgia, and confusion about family and friendship by creating the feeling that it could have been made at any time between 1960 and now. What inspired you to choose this style?

By putting Zoe’s story in the past, the film evokes a feeling of longing like going back through a memory. Perhaps things are remembered differently and with plot holes that create a vague picture; a parallel that Zoe goes through as she learns her family history through the use of the zoetrope.

A zoetrope is a type of moving picture where the film is set in a drum-like cylinder. When it spins, the zoetrope creates the illusion of movement with pictures. In Zoe, the images in the zoetrope are projected around the room. I saw the zoetrope, one of the first film technologies, as symbolic of the trope of an emotionally absent father. What was the rationale behind including this archaic, yet fascinating, technology?

I was really fascinated by the archaic technology of a zoetrope because of its simplicity and the ability to create the first form of moving pictures. The whole concept of the story actually originated from the idea of the zoetrope. I liked the way a story can be told without any dialogue and solely just from showing a couple frames.

This movie has multiple perspectives, yet focuses on Zoe. What is the effect of telling the film through a teenage daughter’s (Zoe’s) perspective rather than another character?

Being a teenager is not easy. So many expectations and pressures from family and friends; maybe the problem could also be the lack of support. Telling the story from Zoe’s perspective shows how parents treat a child during hardship. Diving into the reveal of family secrets and issues that were hidden from view. Zoe’s present and the past come together as she learns more about her family and how people change through it all.

You play around with lighting quite a bit in the film. What led you to make choices like bringing in warm light into a cold family atmosphere?

From going back in time through the zoetrope, we see that even though Zoe has a rough time socializing with her family, there are warm memories that build the foundation of the family before it was all taken away by commitments, responsibilities, and addictions.

In the dining room scene, the camera is angled downward looking at Zoe, her dad, and her mom, and then pans to a close-up of each character. Why did you make the decision to create this type of perspective in the film?

That scene captured the biggest tension of the entire film. We wanted the viewers to engage with the character’s emotions and the mood of the environment so we had the camera pan according to the actor’s actions. As for the camera tilting down looking at Zoe, her dad, and her mom, no one is in a superior position above anyone. It follows up to the tension after we see that Zoe’s dad is an addict and her family is actually falling apart. 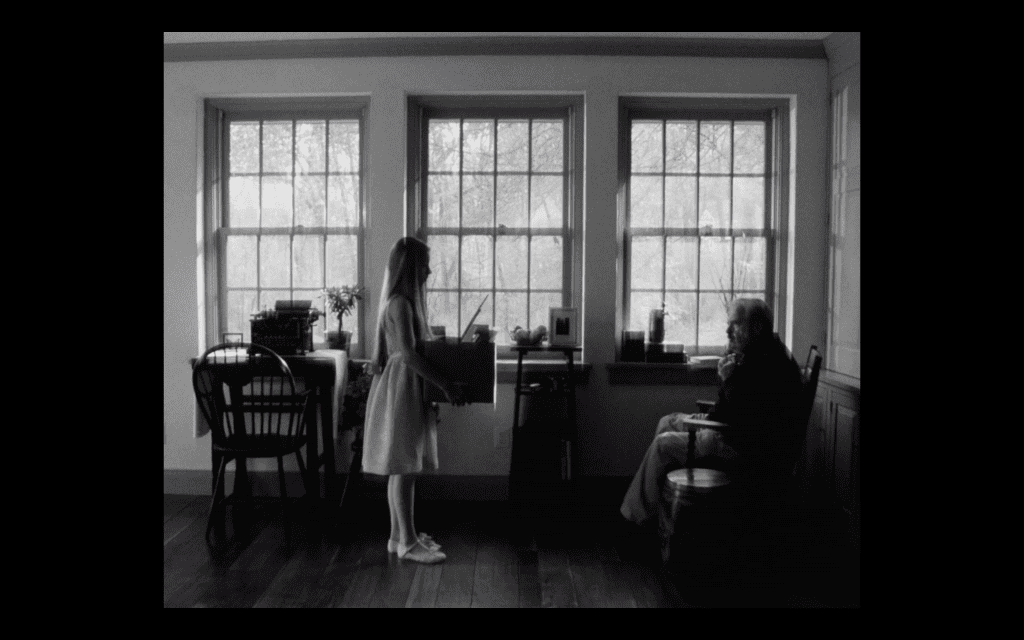 A still from Zoe

This film shows two different narratives of male behavior in family dynamics: one about a dad who is addicted to multiple substances, and one about a supportive, loving dad and grandfather. Why was showing these two different types of male familial roles important to the story?

I guess it applies to most of the household I’ve known growing up. Dads, in my experience, are always trying to be protective of the family since they are “supposed to be” the head of the family. For Zoe and her mom, we see that he is doing his best to uphold the responsibilities and duties as a father and husband. However, sometimes they would revert to other alternatives to escape reality. Viewers see quickly that Zoe’s family is falling apart. Her parents are trying to pretend everything is great on the surface but Zoe is attentive to her surroundings, to her current household condition. We wanted a mixture of warm and cool lighting whenever Zoe interacts with her parents to show the hidden warmth of the family and the overflowing tension between everyone. There are a couple scenes with just her mom and dad. We wanted those to be warm tones to show the love they still have for each other despite the fact that they eventually separate. We mainly worked with HMIs for the background lights to give separation along Litemats for the keys. We faced lots of obstacles with the lighting due to the house being really old. Hence, our lights keep tripping but we managed to pull it off. Our G&E crew was amazing and our gaffer, Quynh Le, has extensive lighting knowledge.

Most of your scenes are shot with very little dialogue. How did you build the story so that the film’s atmosphere would emerge in such a compelling fashion?

We wanted to use actions instead of words to tell the story. My director, Noorman Wicaksono, and I both have a background in cinematography so we think a lot alike most of the time. We wanted to play with different camera angles and camera movement to enhance the emotions. When we were watching the interviews, one thing we noticed is that Emma Woerle, the actress who played Zoe, has such a strong acting presence by just playing with her body language. We were really looking for that aspect to tell the story instead of using dialogue. 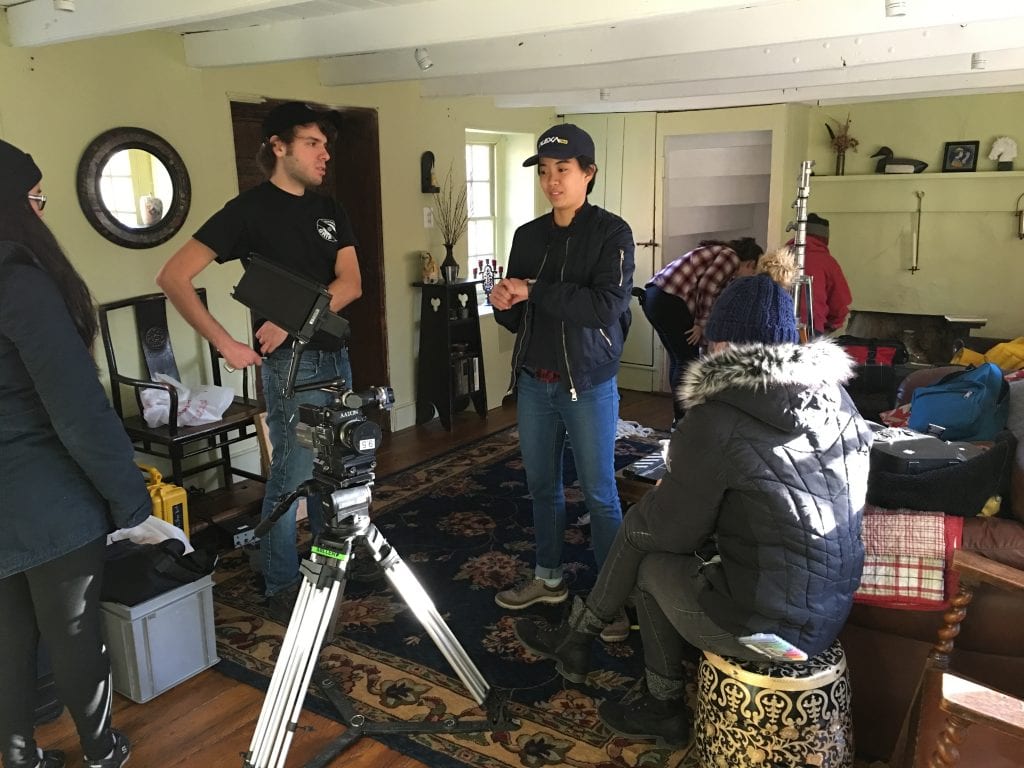 A behind-the-scenes look at the making of Zoe

What would you like people to take away from Zoe?

Zoe holds a special place in my heart because it’s a very personal story that many could relate to. Being neglected by groups in school, being detached from your family’s history and stuck in between family feuds. Such events happen, family breaks apart, and through Zoe, we are trying to highlight the realities teenagers face growing up.

What did you personally struggle with most while creating Zoe? What advice do you have for women who may experience similar struggles while filming?

Just the time management of the film. Even though the film was shot just in the house, there were many moving pieces. We didn’t have enough resources to get equipment elsewhere to aid the film so we had to compromise and work with the best we had. We were also struggling to keep a good schedule going because unexpected circumstances kept arising. Most of the standins are crew members and friends. I would advise to keep your head high, believe in your crew and the story you’re telling and make the best of what you have to work with. It’s easier to be frustrated than to find a solution at the moment but it’s honestly more rewarding when you don’t let your emotions get the best of you.

What future plans do you have for this project?

We’ve been on a hiatus for a while upon completing the project. We’ve all just been moving around to different parts of the country and focusing on other projects. Ideally, I would love for Zoe to enter film festivals and be out there. It is fun having what you’ve worked so hard on be recognized.

Can you tell us a little bit about any future projects you are working on?

At the moment I’m back in Malaysia to get a new working visa to come back into the US. While I’m back, I’ve decided to connect with local filmmakers and enjoy the waiting time. Besides, it’s always fun meeting new talent. As for projects, I’ll be traveling around Southeast Asia on a job as a camera operator for a month, which I’m really excited about. The company trusts that I will be a good addition to the team and I couldn’t be more grateful for that opportunity.

Interview with Danielle Earle, Writer and Director of The Haunted Mind of an Insomniac

Interview with Melanie Wise, Founder of the Artemis Women in Action Film Festival

Interview with Lauren Sowa and Zoé Salicrup Junco, Producer and Director of Marisol