Writer and Director Abigail He

Before Christmas follows a young man, Xiao, who dreams of being a musician as he works in a Chinese Christmas decoration factory. What was the inspiration for this film?

The film was inspired by a documentary photo series called Christmas Factory. The photographs were published on a news website and I saw them and was very intrigued by the images. Then I decided to contact the editor and the photographer for permission to adapt the photos into a screenplay. I think what really fascinated me was how the photographs open up a world that I was not aware of at that time. That city is called Yi Wu and they have the biggest Christmas decoration industry in the world. But nobody really knows about that. So for me, those photographs were kind of like a stage curtain that makes me want to know what else is behind it, even just through my imagination.

What was the experience of casting and directing your cast like?

I think we were very lucky in terms of casting. We didn’t have an open call audition or anything like that. I always wanted to have a non-professional actor to play the lead ever since I was developing the script. There is something about authenticity and purity when it comes to non-professional actors. They are not playing the roles but rather being themselves. My assistant director, who helped me a great deal during preproduction and production, sent me a candid photo of a student who was studying at Beijing Film Academy. And from that photo, I knew he would be the right person to play the protagonist. He was basically untrained, he had just turned 18 at that time, and he has a similar upbringing to the main character that was written, which I didn’t know until we finally met. So we were fortunate to find the right person to play the lead so easily.

In terms of directing, I always like sitting down with my actors and having a talk before we move on to production. Not just to talk about the characters and the story, but also about their personal lives if possible. I find it very helpful because it offers actors the chance to build their personal connection with the characters, especially to non-professional actors. And we also build our trust through that process. So once the camera starts to roll, they are not just playing the parts but exploring themselves. So the directing part on set was very smooth because we had all those discussions beforehand.

Music is only heard in this film when Xiao is singing or listening to music. Why did you choose to portray music this way instead of a traditional soundtrack?

I think aesthetically, I wanted the film to be as realistic as possible. So that really set up the tone of the film. In real life, we don’t hear a soundtrack playing in the background like it does in a movie. We only hear voices and noise. I prefer to have the audience feel the world themselves instead of me telling them what to feel through the emotion portrayed by the soundtrack. In the film, we didn’t have a chance to listen to the whole song until the very end, and neither did Xiao Lee. So the audience and the character are equal in that sense.

What would be the main message you would want viewers living outside of China to take away?

I hope the film offers people a different perspective on holidays. Not just Christmas, but the holidays in general. While we are celebrating holidays and special occasions, maybe we shouldn’t take things for granted. Maybe we should be more grateful for the things and the people around us. And to go one step further: what is the real meaning of joy and happiness in life? 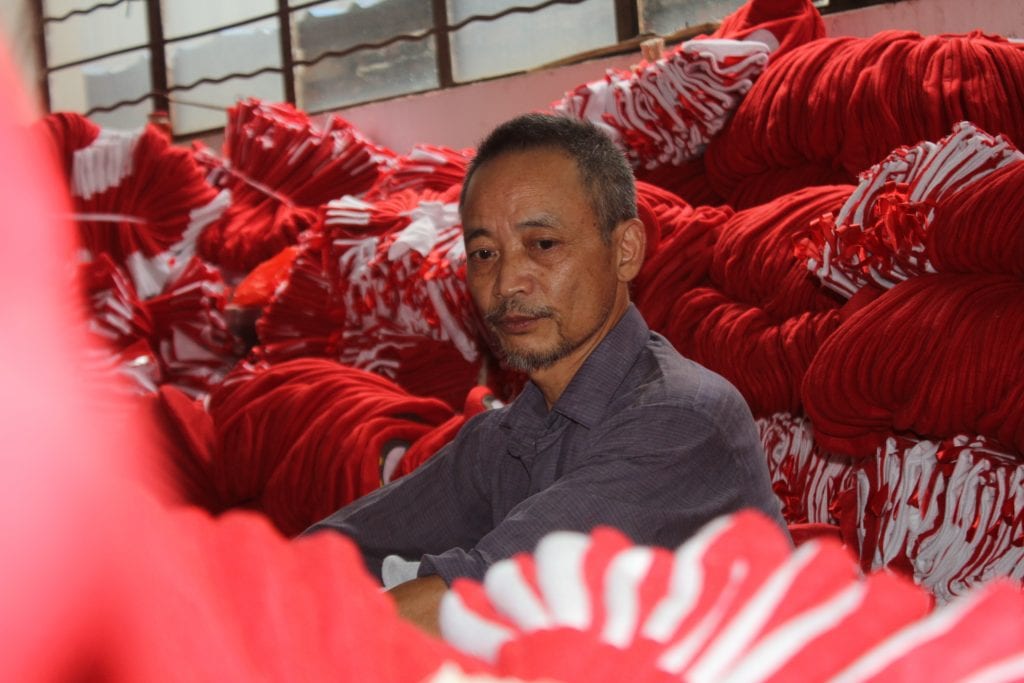 Behind the scenes at the factory where Before Christmas was filmed

I think, for the people in the US, those holiday products are accessible, inexpensive and mass-produced. And there are so many holidays within a year which makes the holiday decoration industry such a huge business. The mass production and low-price have devalued the meaning of holidays. People are less excited about them and take their garlands and birthday streamers for granted because of the low price. But behind the mass production, there are people who give up their dreams to become part of this industry and to produce those cheap decorations. All these lead to the real meaning of happiness in life.

Holidays are supposed to be symbols of happiness and joy. Yet, the factory workers give up their happiness for foreign holidays that are being devalued.

I found it very ironic.

What is the message for viewers in China?

Most people in China still don’t know about the Christmas decoration industry. And for those who are actually working in the industry, they could care less about what they are making. It really is about social inequality. Christmas is a foreign holiday for most Chinese people. Only social elites and young people would celebrate Christmas and they often only celebrate it to reinforce their social status. So I hope the film will shed light on social inequality in the country. It should be discussed and it shouldn’t be an elephant in the room.

Why is this an important story to tell in today’s society?

I think the story is relevant and universal in today’s society because ultimately, it’s an outcome of capitalism. There is so much shocking news about how people from working class or low-income households are desperate just to survive in society. We are all part of the system but as artists, what can we do about it? I believe cinema has its own power to shed a light on social inequality and to call public attention to it. Just like Bong Joon-ho’s Parasite this year, filmmakers from around the world are using different angles to reveal the universal capitalist society we are living in. 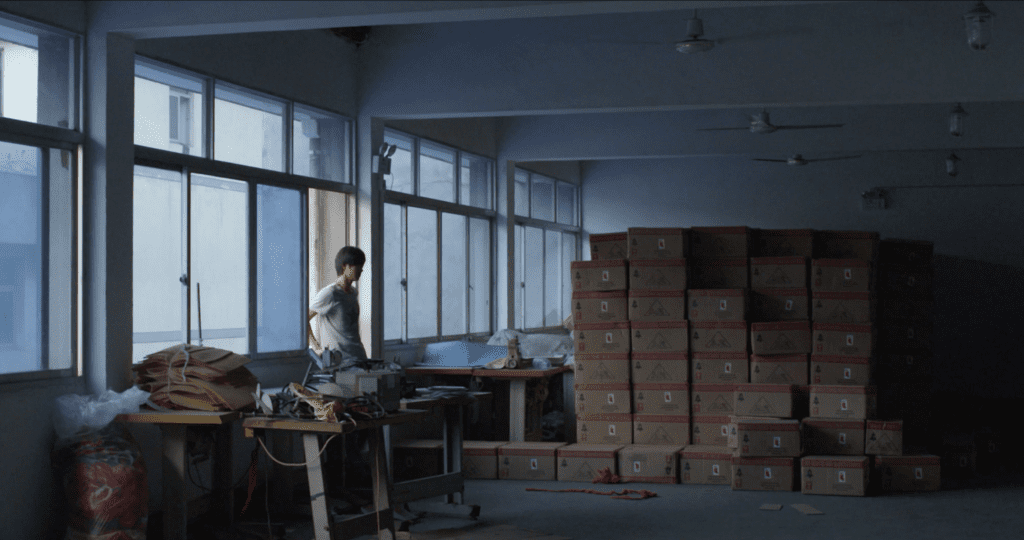 A still from Before Christmas

It was a challenge but also a blessing. We knew we needed to film in an actual Christmas factory but we didn’t lock down the location until the very last minute, like one day before the production started. But once we had a location, everything came together in a very organic and natural way. My DP and I had similar visual styles and we already had the vision in mind so the actual footage we shot was very close to what we storyboarded. I still think we were absolutely blessed to be able to film in an actual Christmas factory because we did minimal production design and everything was just the way it is in reality at that factory. We were able to capture how the hats and stockings were actually piled in the movie. And all those workers in the background, they were the real workers who were taking their shifts during our shooting. So it was like having reality and fiction merge into one location in a very organic way. Magical realism in a sense.

What are your plans for this film and what is next for you?

We are planning to launch the film on Amazon Prime or other streaming services to reach more enjoyers of independent cinema.

And I’m in preproduction of my new project Other States of Matter and production will begin in early February. As the writer and director of the film, I’m very excited about the project because it has a very different style from Before Christmas. The film serves up a dreamlike, nonlinear journey about female puberty, growth, and adulthood through the eyes of a 14-year-old girl. Based on a dream I had and deeply influenced by psychology, surrealism, avant-garde art, and expressionism, Other States of Matter explores the ambiguity and essence of the female psyche and the human mind.

Abby’s either on her way out or on her way back in or she will continue hooking and all of the choices will be fine, but I think the central question of the film is, “ I belong to only you but you don't want me,” and that is where the film ends for me—that is the resolution and acknowledgment of the question in 93 minutes.

Interview with Hanna Polak, Director and Producer of Something Better to Come