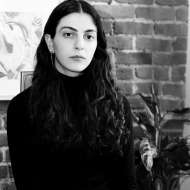 United States
New York
https://noorgharzeddine.com/
Instagram
Noor Fay Gharzeddine is an award-winning Director / Producer based in New York. Her debut feature, Are You Glad I'm Here, has screened at almost 20 film festivals world wide and is currently available on Amazon and other SVOD platforms. Noor enjoys studying unlikely relationships and strange environments in her work. She is fascinated with films that blend hyper-realism with absurdity, and tragedy with comedy.
Noor has a BA in Film and Electronic Arts from Bard College, where she had the privilege of studying under influential filmmakers such as Kelly Reichardt, Ben Coonley and Peter Hutton. She is currently shooting a short video series, developing a scripted comedy, and writing her next film.