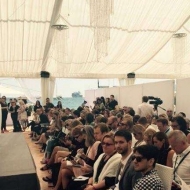 Moira Jean Sullivan
Moira teaches cinema studies and feminist film and theory at City College of San Francisco. She is one of the world’s experts on the work of Maya Deren.
This user account status is Approved
About About
Posts Posts

Behind the #MeToo and #TimesUp social media campaigns

Years ago, a feminist film distributor remarked that the problem with Hollywood is that anything that can…

“We see you, we hear you and we will tell your stories." -Reese Witherspoon,…

Cannes and Gender Equality, the work continues on site

The 73rd Venice Film Festival, La Biennale di Venezia, is one of my favorite film…

Cannes Film Festival Continues to Put Marginal Spotlight on “Women in Film”: May 11–22, 2016

After ten days of intensity, the Cannes Film Festival came to an end on May 22 with…

On the occasion of the tribute to Chantal Akerman at the 38th Créteil International Film Festival, Moira Sullivan reviews…

On the occasion of the tribute to Chantal Akerman at the 38th Créteil International Film Festival, Moira Sullivan reviews…

Interview with Stig Björkman, Director of Ingrid Bergman: In Her Own Words

This piece is part of our double feature on Ingrid Bergman: In Her Own Words. Please see Moira Sullivan’s discussion of…

Ingrid Bergman: In Her Own Words: From Diary to Home Movies

This piece is part of our double feature on Ingrid Bergman: In Her Own Words. Please see Moira Sullivan's interview with Stig Björkman, writer and director of the film. Written by Moira Sullivan…

The Swedish Gender Equality Package for Women in Film: Interview with Anna Serner, CEO at the Swedish Film Institute

Anna Serner has been the chief executive officer of the “Swedish Film Institute” (SFI) since 2011. SFI is a national organization…

This review is part of a double feature on the 2015 Cannes Film Festival. Please check…

This article is part of a double feature on the 2015 Cannes Film Festival. Please…

This review is part of a double feature on the 2014 Cannes Film Festival. Please check out Moira…

This review is part of double feature on the 2014 Cannes Film Festival. Please check out Moira Jean Sullivan's…

A remake can be a welcome addition and Peirce’s film is just that. The cinematography, mise-en-scène, art direction, and character development are modernized, making the film accessible to today’s youth, particularly the reality of cyberbullying.

I am a daughter in a mother/daughter relationship, I have been in the girls’ locker room when the girls are acting mean and they have a particular way of doing that. I also, at the same time as you, look at how I present my gender and live. I am a tomboy.

Interview with Sini Anderson, director of The Punk Singer

Kathleen was really the strongest voice in the beginning of Third Wave feminism in [Riot Grrrl]. And really daring to be outspoken enough to say, “All women to the front.” That hadn’t been done before.

Sini Anderson’s documentary The Punk Singer is many things. It has been unfairly criticized for being a glowing highlight reel of Kathleen Hanna’s artistic, feminist, activist, and musical projects bordering on hagiography, and for not focusing enough on the larger movement of feminism or Riot Grrrl. In my view, those misguided criticisms miss the fact that the film, at once fierce and delicate, delivers feminism through a punk rock lens via the life and music of Kathleen Hanna.

La Vie D’Adèle (Blue is the Warmest Color): When a Lesbian Narrative Wins the Palme d’or in Cannes : To Be, or Not To Be, a Lesbian.

Why so many become enraptured about lesbian sex on screen is already asked and answered: it sells. It is a well-known male fantasy, but as far as a female fantasy, this depends on how the scenes are shot. Maroh has already addressed the problems. The nearly 10-minute sex scene is considered “long” by both standards, and the primary selling point of the film.

As a storyteller, Stacie Passon wastes no time and rather than explaining everything in dialogue, her picture language is both economical and meaningful. The interior sets of the family home have a hygienically sealed cleanliness and smoothness.

Abby’s either on her way out or on her way back in or she will continue hooking and all of the choices will be fine, but I think the central question of the film is, “ I belong to only you but you don't want me,” and that is where the film ends for me—that is the resolution and acknowledgment of the question in 93 minutes.

It’s always a collaboration between the director and me, and in the case of Concussion, Rose also had a lot of input on where there should be music. I’m also a big fan of using silence in a score. So I always give the film one or two viewings where I actually place silence where I think it should go. Silence can be powerful.

Based in San Francisco and Stockholm, Moira teaches cinema studies and feminist film and theory at City College of San Francisco. She is one of the world’s experts on the work of Maya Deren and is regularly invited to speak about her around the world. Moira's scholarship is published in the anthology "Maya Deren and the American Avantgarde" (2002). She attended film school  in Stockholm and at San Francisco State and has taught film production at a feminist women's college in Sweden.  Moira is a prolific writer of feminist film criticism and theory and has been published in several forums - online, radio, and print. She has attended "Créteil Films de  Femmes" since the 1980's and has written extensively about the festival for the non-French speaking public.