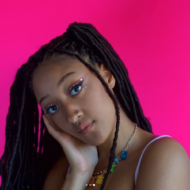 Heaven Infinity is a writer and independent filmmaker at the University of Pittsburgh, where she is majoring in Film Production with a minor in Creative Writing. Heaven has made live-action and animation short films that  explore her nostalgia for early 2000’s pop culture such as old computer games and Y2K fashion. She has written screenplays and short stories that focus on the coming of age experiences of young boys, inspired by the love she feels for her two younger brothers. She has published Pitt News articles on her film fascinations such as Scott Pilgrim vs the World and Gnomeo and Juliet. Heaven currently works as the Managing Editor of agnès films.