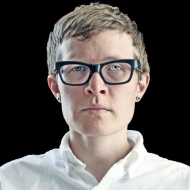 Denah A. Johnston
This user account status is Approved
About About
Posts Posts
Comments Comments

Denah Johnston is a teacher, writer, filmmaker, and curator based in San Francisco. She has a special interest in bringing experimental film to the people. She has worked as programmer and pre-screener for the San Francisco LGBT Film Festival, San Francisco International and Athens International Film & Video Festival.

Some of her highlights include a Queer Underground Film panel supported by the NEA and Warhol Foundation, presenting films to audiences worldwide: US, Mexico City, Oaxaca, Berlin, and St. Petersburg, and as former Executive Director of Canyon Cinema Foundation, she transformed the organization into a nonprofit.

Denah is currently the Chair of the Cinema Department at City College of San Francisco where she teaches film studies. She is also an editor for agnesfilms.com showcasing work made by women and feminist scholars. Denah’s current research involves the women of Canyon Cinema.